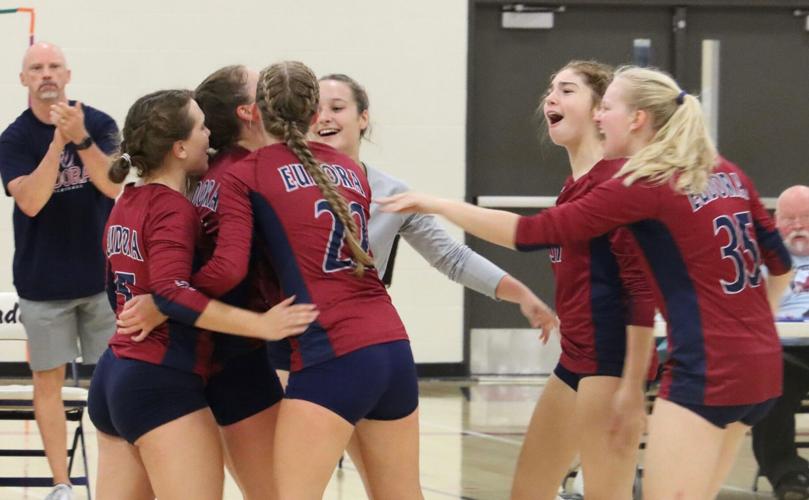 The volleyball team gathers to celebrate after a point against Baldwin Monday night at Eudora High School in an effort to try and build an early lead. 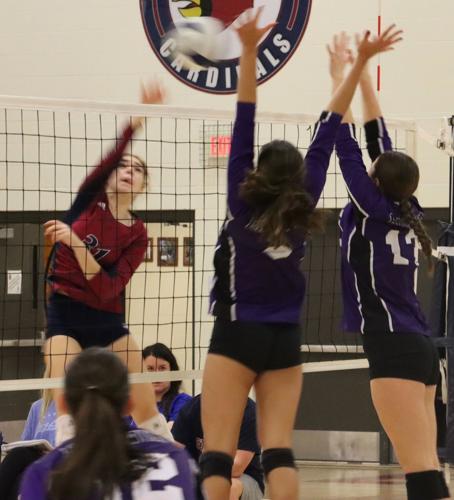 Sophomore Adalyn Hemphill applies the kill against Baldwin, hoping to give her team a much needed late point.

Volleyball coach Mallorie Cleveland thinks her team played their best match of the season against Baldwin Monday night despite coming up just short at home in five sets.

“I told them that tonight was a team effort on everybody’s part,” Cleveland said. “That is probably one, the hardest I’ve seen them play, the most disciplined I’ve seen them play and in times of struggle they turned on the mental toughness when they needed to.”

The Cardinals (5-5) went toe-to-toe with one of the top teams in the state in Baldwin, who entered the match with a 13-1 record, and already one win over Eudora under their belt.

Even though Eudora went up two sets to one heading into the fourth set, the Bulldogs closed out strong and leaned on their experience to pave the way for a dramatic five set victory.

In spite of the defeat, the Cardinals’ effort showed throughout the five sets in all areas, whether it was creating offensive opportunities on the attack, or blocking back kill attempts on the defensive end.

In the first set, Eudora came out on fire by scoring the first several points and controlling the pace of the game early to give themselves the early lead.

However, Baldwin did not let the Eudora lead last down the stretch, as the Bulldogs slowly clawed their way back over time, and eventually took their first lead late in the opening set, setting the stage for the visitors to take set one 25-22.

Despite dropping the first set, the Cardinals felt focused and refreshed, keeping their spirits high heading into the future sets as they felt they were right there to knock off their rivals.

“I think we benefited a lot as a team together,” junior Parker Long said. “I think we improved on many things, and Baldwin is always a hard rivalry game. It’s always a fun entertaining game.”

The momentum that Baldwin created in the opening set carried over into the second set, eventually taking a sizable lead to open set two.

The Cardinals did not back down from the early hole, and after coming back midway through the set, they took a 23-16 lead late in the set and, led by outstanding play from senior Sawyer Schreiner and junior Caitlyn Peterson in the middle, they eventually won the second set 25-17.

The third set featured a back and forth battle that saw each team make their runs, but neither team built a big enough lead to win the set in just 25 points.

After clutch plays by all six Cardinals on the court, Eudora won the third set 28-26, and went up two sets to one heading into set four.

“Going into it I don’t think any of us expected that game,” senior Josie Pickett said. “It was a really fun game to play, and we're going to be a lot better this season than we thought we were going to be.”

Looking to seal the deal on the home conference victory, Eudora started off in the hole once again in set four, as Baldwin mounted another early lead.

Despite the Cardinals tying it up at 13 apiece and making a late run to cut the deficit to 24-23 late, Baldwin held on and won the fourth set 25-23.

It now all came down to one final set, with the first team to 15 points winning the set and the match once and for all.

The first half of the fifth set started back and forth, but Baldwin eventually pulled away late and won 15-10 to take down the Cardinals in five sets in the second meeting between the two rivals.

“It's amazing how much this group has continued to improve,” Cleveland said. “They've stayed hungry and they have just stuck to the system and they fought together. If we buckle down defensively, we are going to rattle a lot of teams and we're going to stop big hitters like we did tonight.”

The team plays its next match at 5 p.m. Thursday at home against Basehor-Linwood and Baldwin, closing out a five match homestand for the Cardinals.