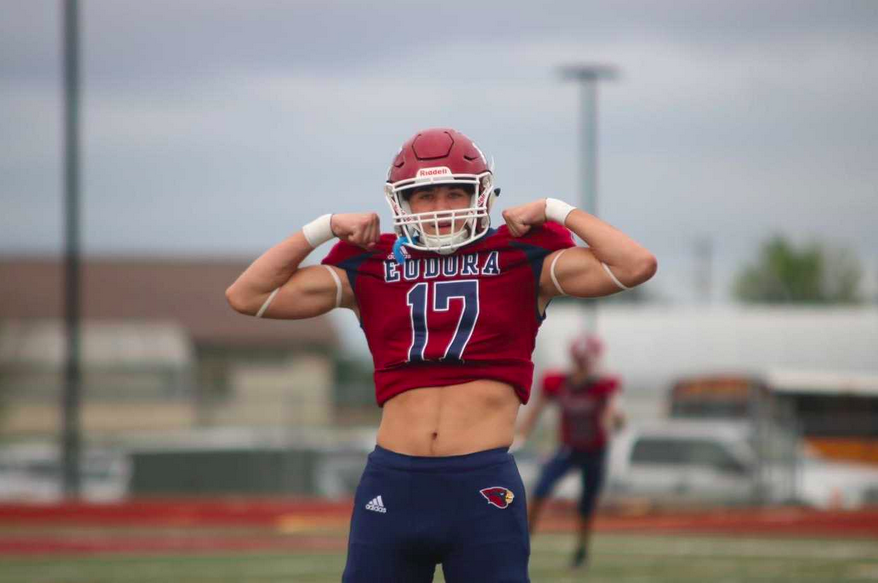 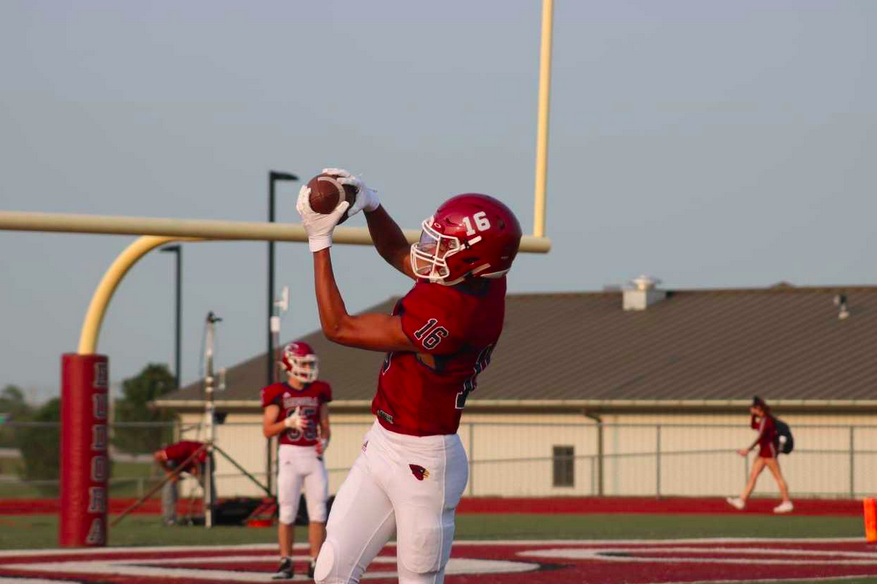 Head coach Sean Hayden previously said he could only think of one other Eudora football player with the recent opportunity to play Division I. Now, there are three on the current team.

Hamm has received eight scholarship offers since December; a list that includes Penn State and the University of Nebraska. Meanwhile, Bender received an offer from the University of Kansas last month from recruiting coordinator Joshua Eargle.

Hamm, who stands at 6 foot, 6 inches and 220 lbs, said he started playing football in second grade. He said he was reluctant to get out and play at first.

“I never played flag football, so I was really scared since I didn’t know any of the positions and I didn’t know where I’d fit in on the team,” he said. “But when I got out there and realized that I was bigger than everybody, the fear kind of went away.”

Hamm got his first offer in December from Kansas State and then the University of Kansas called just a couple of hours later.

Hamm is being recruited on both sides of the ball. Penn State wants him to play defense while other schools want him to play tight end. He doesn’t have a preferred position.

“I just love being out there, being able to play the game and being on the field with the Friday night lights,” Hamm said.

Hamm also is involved with basketball and track. During the summer, he trains in the football summer weights program and participates in individual workouts with his teammates.

“Gaining weight is a big thing I’ve been really trying to work on,” he said. “I’ve been consuming like 300 to 400 grams of protein a day and two to three workouts a day, so I’ve really been pushing my body trying to get me to where I need to be.”

Bender realized he may be able to play college football during his freshman year as Etter started getting attention on the field and with the help of Hayden.

“Coach is really good with helping us out and reach for our goals, so I just talk to coach and get good grades,” he said.

Bender said the team has improved over the last couple of years, and he believes the confidence after last year's playoff win will carry over into next season. Although he now has a college offer, Bender said his priority is still his high school team.

Each year, Hayden tells his players interested in playing college football to put a highlight tape together and fill out a form that he sends to his college contacts. Hayden said regardless of who is getting offers, the team must work hard and make sure they keep learning life lessons.

“I’m glad we’re able to provide coaching that gets these kids looked at and that they’re able to pay for their school,” he said.

Hayden said having the Division I talent won’t change how they approach games. He said they are going to keep working and stay disciplined.

“It’s up to the other teams to focus on us,” he said. “We might get in a game and they might be worried about where a certain kid is lined up, and that’s up to them.”

Hammerschmidt said the unselfishness of the players is what gets him most excited heading into next season.

Hamm said his choice of a major and his playing time will be factors in his final college decision. He said Etter wants him and Bender to come to Kansas State, but he is looking for the best fit for his future.

“It’s all just where we’re chasing our dreams and what school uses our position the most is probably where our paths either break or stay together,” Hamm said.