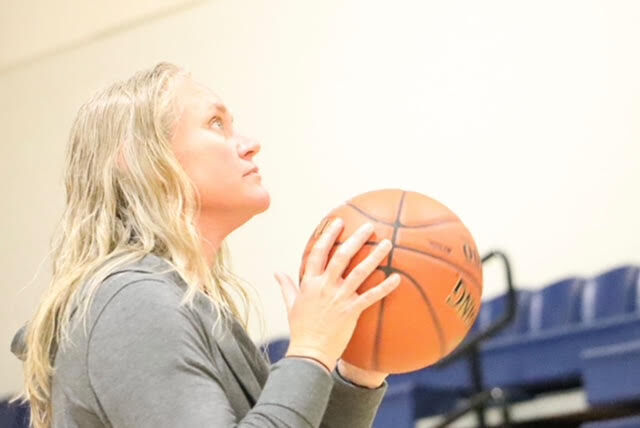 Gretchen Schreiner takes aim for a basket in the Eudora High gym. 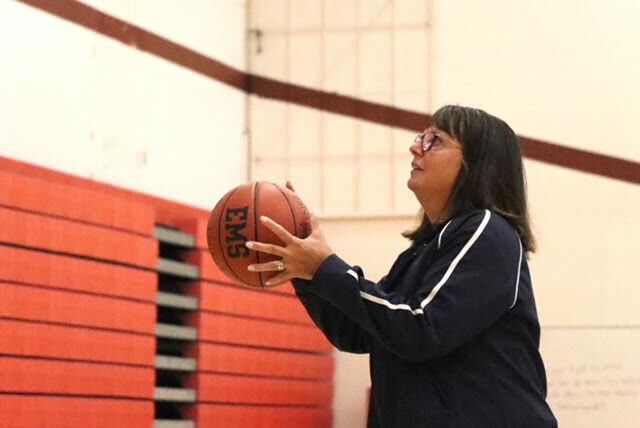 Holly Kracl wants to see an equal playing field for her granddaughters. 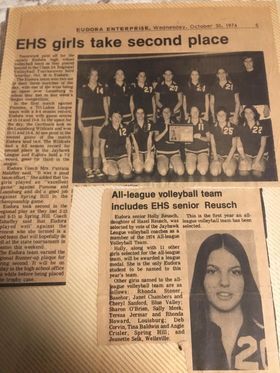 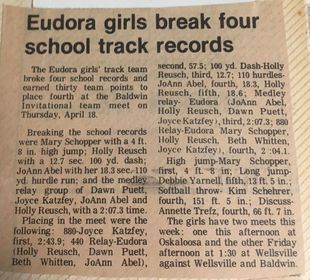 This is the sixth story in a series examining girls sports in Eudora and the 50th anniversary of Title IX.

Shockley, who graduated in 1971, said girls could compete in track but didn’t get the recognition that the boys got. Basketball was even worse.

“We had a basketball team, if you want to call it that, but we didn't play anybody but the teachers,” she said. “The teachers played us in my senior year because we didn't get to travel to other schools and play sports.”

Shockley is one of many outstanding female athletes to graduate from EHS in the past 50 years, a history that has slowly seen these athletes be able to make bigger impacts in sports.

Shockley was voted most athletic in her senior year. She and her fellow team still found ways to show the boys how it’s done on the track.

“I remember one year the girls did so good at our track meet and the boys didn't. We did so well that the coaches wouldn't let the girls on the bus until the boys cleaned the bus,” Shockley said.

Holly Kracl graduated in the class of ‘75 and competed in basketball, volleyball and track.

Kracl recalled the most popular sporting event for the girls was track and field because meets would include both boys and girls.

She said volleyball did not become an all-league team until her senior year when they were named regional runner-up. Coaches were hard to find compared to now, Kracl said.

“You got who you could to coach. My first volleyball coach wasn't a coach, but they needed somebody. She didn't know anything really about volleyball. For my junior and senior years, we had a really good coach who was an athlete from Iowa. We excelled a bit more at that time,” Kracl said.

Girls sports would start to pick up in years to come. Gretchen Schreiner graduated in the class of ‘92 and became a star player in her years playing basketball.

She and her team made an appearance in the girls state tournament in 1992, was named 3A player of the year and achieved a 1,000-point career milestone in the same year. A milestone she now shares with her daughter Harper Schreiner, who reached the goal in January.

Schreiner said her love for basketball came naturally even though her father never competed and her mother never had the same opportunities she had in high school. Being an athletic kid was always in her, she said.

“It was an activity I really loved. I liked being competitive. Of course, all my friends also did it, so it was just never a question of whether or not I was going to play. I just always loved it,” Schreiner said.

Title IX wasn't a law Schreiner knew much about in high school but would learn more of it after she graduated.

“When I went on to play in college, it was mentioned a lot because what I received in scholarships was based on it,” Schreiner said.

These Eudora athletes want to see the future of women’s sports in high school and beyond grow further to new heights. These women have left a legacy in and off the courts for their schools and families.

For Schreiner, the vast potential in the opportunities sports give to girls is most important, she said. She hopes the expectations never lower again and sports bring the best out of young girls.

“It offers so much and it's not an easy decision to make because it's a lot of work and time. We have a lot of students who are really involved. I hope they keep taking the time to participate in sports with all it offers in life and the lessons that it gives,” Schreiner said.

Envisioning an equal playing field is what Kracl wants to see for her granddaughters. She wants to see more schools give out scholarships to women both athletic and academic so her family can live new experiences.

“To have girls sports become just as an important factor as male sports are,” Kracl said.

Shockley is of a similar mind, wanting more opportunities for young women. Opportunities she has already started to see with two of her granddaughters receiving scholarships to further their athletic careers.

“I see now the difference. Now that I've got all these granddaughters, you know, I want them to succeed. I want them to have all the stuff that I didn't have a chance to get,” Shockley said.

Part 9: Young girls explore what participating in sports means to them.