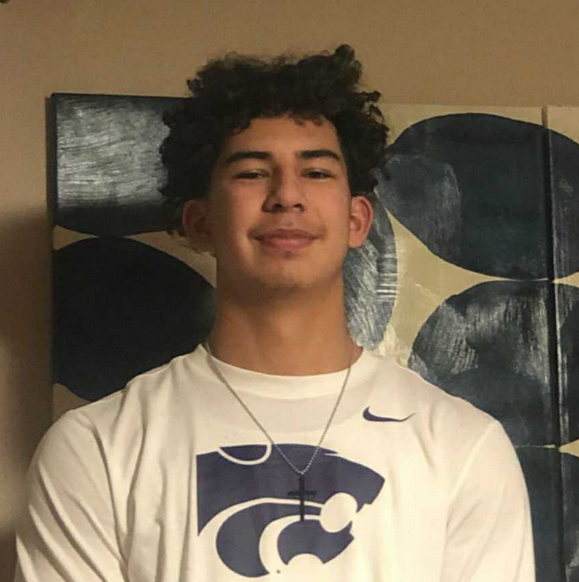 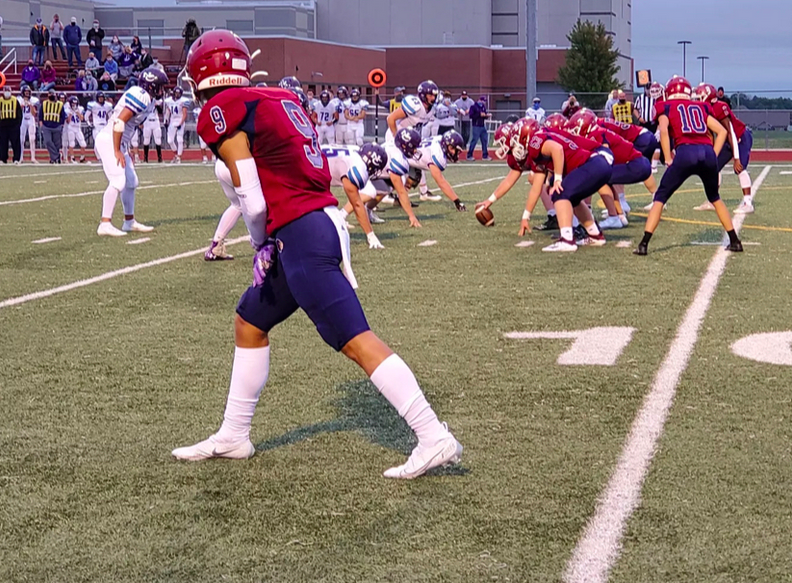 Silas Etter lines up at wide receiver at a home game against Nemaha Central last season.

Silas Etter fell in love with football in kindergarten when he made his first tackle while playing against second graders.

His eagerness to improve, his size at 6 feet, 3 inches and his potential to play at the next level were all factors in Kansas State University offering a scholarship to the Eudora junior.

Terri Etter, Silas’s mother, said she could already tell Silas was going to love football from his experience in kindergarten.

“After the first time he had ever played, you would always see him with a football in his hands,” she said. “He was in the backyard always running around with a football, running routes.”

“He would play Madden on his Xbox and then pause it and run out in the backyard and run the play he just played on the video game,” she said. “He would just do that over and over.”

Silas Etter said the video game is what got him interested in playing football.

“I was a big time gamer until I was 6 and then I got really deep into Madden so I just started playing football,” he said.

His mother would drive him to football camps as he was beginning his freshman year and would be there to support him if he ever came home discouraged.

There would be times when she would complain about the money she spent on his football camps over the years, but he reassured her that he was going to play college football and he was doing it for her.

“He'd be like, ‘Mom, I’m doing this so you don’t have to pay for my college, and this is to take care of you,’” she said. “So that always stuck in the back of my mind trying to be 100 percent supportive of what he loves.

Terri Etter learned about the scholarship offer from Kansas State when Silas was supposed to be on Zoom for one of his classes and he came out of his room to deliver the news.

“It was more of a shock to me, like I didn’t believe it,” she said. “He said, ‘No, it’s a committable offer and head coach Chris Klieman just called me.’”

While she didn’t remember her exact reaction, she was excited.

Terri Etter said Silas has built a relationship with the coaching staff, and she had the opportunity to speak with them.

“Once he makes up his mind and makes a decision, he’s not going to go back,” she said. “He feels like it’s home, and he has gotten really close with the coaching staff.”

Taylor Braet, director of football recruiting at Kansas State, confirmed Etter is their first commitment from the class of 2022.

Etter plans on signing during national signing day next year, which is typically the first Wednesday each February.

“They were the first team to show love and that’s a huge thing for a lot of athletes,” he said. “Whenever a team is first to show love, they obviously care a lot.”

“He has had some good skills since he was a sophomore in high school,” Hayden said. “He has grown and gotten faster and stronger, and they really liked that about him.”

Etter knew he would play college football early in his sophomore year when he did a 225-pound hang clean in the weight room. He said he did not care where he was going to play because he just wanted the opportunity to play at the college level.

“At the end of my sophomore year, I was happy with how I did,” he said. “I could work and definitely get to where I want to be."

He participated in a virtual tour and walk-through of Kansas State where they talked about their fitness trainers, nutritionists and other resources for athletes to help with their studies.

“I went to three of their four home games this year, so I knew a little bit about the campus already because my family actually lives up there, too,” he said.

Hayden said he believes Eudora has only had a single Division I football player until recent years.

“Now we have had three in the last three years, and It’s really exciting for the kids,” he said. “I wish every kid would go out for football because colleges really like long kids who have speed, and there’s a spot for everybody.”

Hayden said players on the team have learned to not worry about individual stats as much over the past year.

“The kids learned quite a bit last year about competing and not worrying about individual stats,” he said.

“He has taken on a role as somebody who gets things going as far as organizing offseason workouts with his teammates,” he said.

Hammerschmidt noted Etter’s work ethic and willingness to look for ways to improve.

“He doesn’t need someone telling him what to do,” he said. “He just kind of goes and does it on his own.”

Etter exhibited his flexibility on the field as he split time on offense and defense this year. He would like to play outside linebacker in college, but he also trains as a wide receiver.

“This year I started to lean a little bit more on the defensive side because I started enjoying it a lot more,” he said. “They recruited me as a wide receiver and an outside backer so whenever I get up there, they will tell me what position.”

Drew Steffen, Eudora’s defensive coordinator, said Etter adjusted well to his role and helped propel the defense toward the end of this past season.

“We started to ask him to bump out to corner and ask him to shut down the other team’s best player,” he said. “We asked him to do that probably three or four games and that is really when our defense started to turn a corner.”

Steffen said Etter’s athleticism and room for growth will help him transition to the next level.

Etter continues to stay busy during the offseason as he participates in a football camp each winter with Empire 7v7, an organization based in Kansas City.

Players from Kansas and other Midwestern states can try out for the team and travel to different states to face other 7v7 organizations.

Etter said he looks forward to playing with his Eudora teammates in his upcoming senior year and believes the team has potential to make a run at state.

“State is definitely a dream I have always had.” he said. “We have athletes for days, and I think we would definitely make it.”