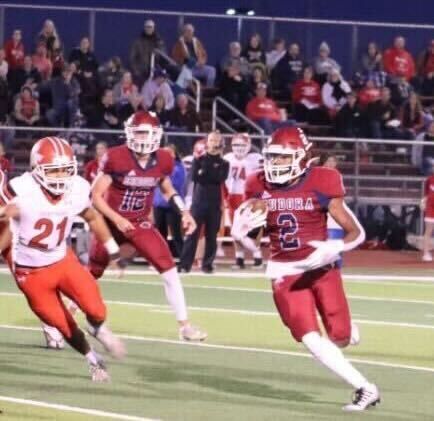 Senior Octavius Lyles gets around the edge to score on a 30-yard touchdown run, his first of three scores against Tonganoxie. The Cardinals combined for seven rushing touchdowns on the night. 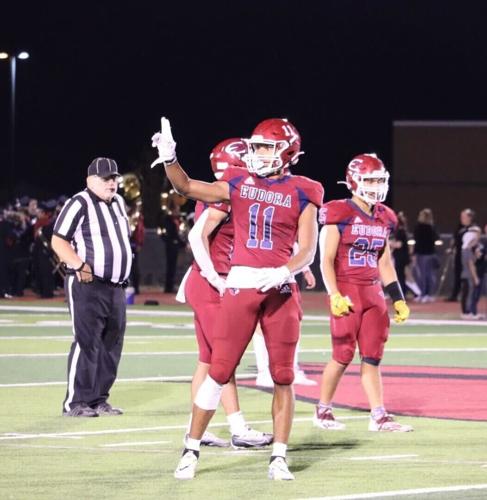 Senior Jaiden Bender signals to the sideline before lining up on defense. The Cardinals forced five total turnovers against Tonganoxie, three of which came on defense. 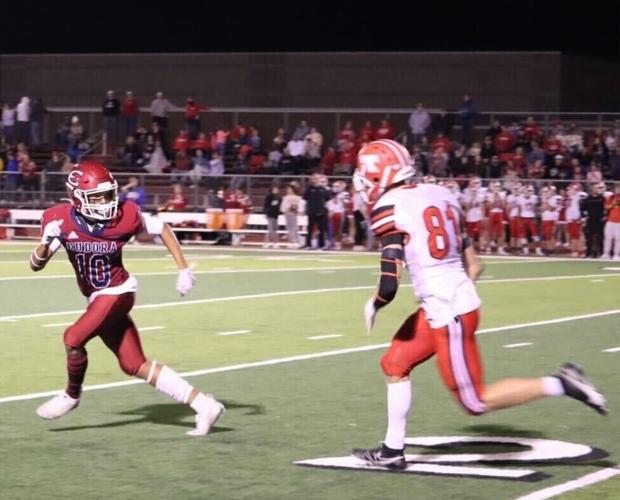 Sophomore Christian Jarrett covers a Tonganoxie receiver. Jarrett had an interception and a pass breakup against Tonganoxie.

Shortly after that, senior Octavius Lyles scored his third touchdown of the night on a 33-yard run. The Cardinals combined for seven rushing touchdowns on their way to a 46-7 win over Tonganoxie. Steffen gave credit to the offensive line after the game.

“We don’t have huge guys on our offensive line, but we got guys that care and care about each other,” he said. “And they just love to play nasty football and do the things that we have to do to be successful because of our lack in size, and so our kids have bought in and we are so blessed to have kids that just love it.”

As the season gets closer to the playoffs, senior Eythen Moore said he thinks when the offensive line plays well it will help the team make a deep postseason run.

“When our o-line can dominate like we did tonight, we will be a scary team to face,” Moore said.

The longest run of the night came on a 59-yard touchdown by sophomore Errol Siemon, his second score on the night. Siemon said the run game’s success was a total team effort.

“Oc is a great guy, he’s a great running back and he’s giving me those chances,” he said. “Our o-line, they’re doing great, they’re keeping the blocks up top. And it all just comes together, we’re all right there in this.”

Forcing turnovers was another key to the Cardinals’ victory as they caused Tonganoxie to lose the ball five times.

Turnovers helped the team establish some quick momentum and jump out to a fast lead.

On the kickoff after the team’s first score, junior Matthew Magette kicked the ball high in the air. The northwesterly wind caught the ball, which caused Tonganoxie to misplay it. Siemon recovered the loose ball and then, four plays later, scored on a 13-yard touchdown run, putting the Cardinals up 13-0 before the halfway mark of the first quarter.

On the ensuing Tonganoxie possession, the Cardinals forced another fumble that junior Braylen Hoobler recovered. A few plays later, Magette scored on a 50-yard touchdown run to make the lead 19-0 before the end of the first quarter.

“It brings up the energy,” Siemon said about forcing turnovers. “All of us are hyped and everyone just feeds off the energy. And it transfers over to offense and we just get going on offense, too.”

With Friday being senior night, many of the team’s seniors made plays as well. For instance, senior Kevin Whitten had a tackle for loss early in the game.

Then, later in the game senior Kale Hammerschmidt had an interception in the endzone that shut down a promising Tonganoxie drive.

Senior Christian Cox also got in the mix late in the game and had a quarterback pressure and tackle on back-to-back plays, which made the sideline get loud.

The Cardinals go on the road to play Paola next Friday for the last game of the regular season.

To donate to support our community journalism, please go to this link.