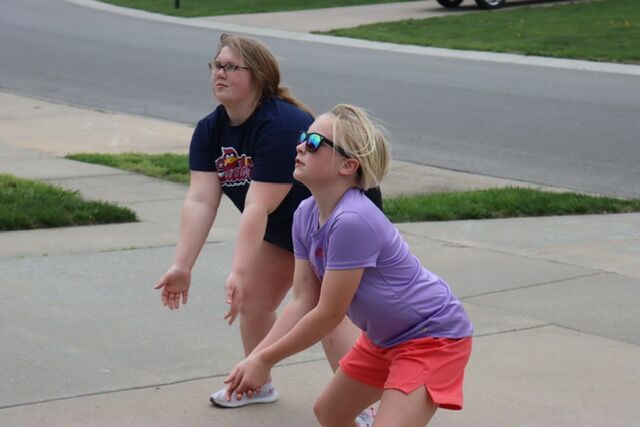 Paityn and Laikyn Perez practice volleyball by doing drills in their driveway. 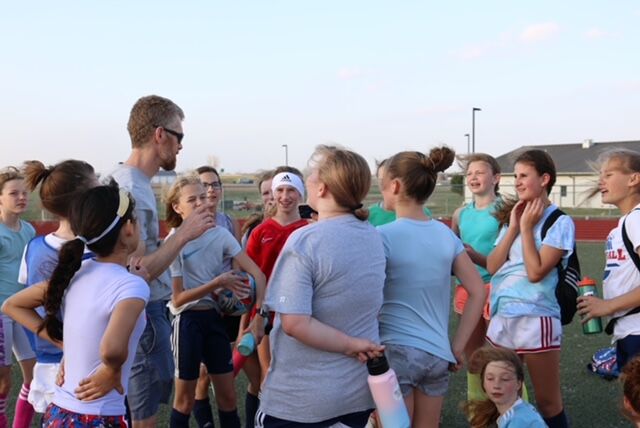 This is the ninth story in a series examining girls sports in Eudora and the 50th anniversary of Title IX.

Fourth grader Laikyn Perez has big dreams for the future.

She wants to be a gold medal equestrian in the Olympics, but not before she plays volleyball at the collegiate level.

Laikyn participates in both of these sports now, but she has tried a variety of sports to try to find her niche, her mother Brynn Lorenz said.

Laikyn’s older sister, Paityn Perez, also plays for Lawrence Landsharks. The two of them got into volleyball during the beginning of the pandemic to stay active.

Paityn said volleyball has changed how outspoken she is.

“I was going into seventh grade. It was the perfect time to start, so I did and it completely changed my life I would say just because I was so timid and shy,” Paityn said. “And then when I finally tried something, I'm totally different.”

To mark the 50th anniversary of Title IX, The Eudora Times has examined the past and present of girls sports. Yet the anniversary is also an opportunity to look to the future and how young girls today will later transform sports themselves.

Lorenz estimated that, between her two daughters, she spends about 25 hours a week during volleyball season attending practice and tournaments, including drive time.

“November 1 to the end of March, we don't have a life. It's just volleyball. Well, I wouldn’t say we don’t have a life. Volleyball is our life,” Lorenz said.

On the court, Laikyn’s favorite position is libero, but it doesn’t matter where she is on the court, just that she is playing.

“I would honestly say the thrill of being on the court,” Laikyn said her favorite part of the sport is.

Fifth grader Hannah Wenger plays four sports during the year, which she said she enjoys to keep her active.

“All my friends are there, and it keeps me healthy and athletic,” she said.

Her mother, Shannon Wenger, said her kids becoming involved in sports helped the whole family adjust after moving to Eudora.

“I think the first thing that it's done for us is just our sense of community here in Eudora,” Shannon Wenger said. “We were new here and so we really didn't get to meet other families until our kids were involved in activities.”

This sense of community is something David Barnhart said he feels when coaching his daughter, Leah.

Since elementary school, the sixth grader has played soccer, which has always been a family-oriented activity.

“For us, it's a community thing, because all these girls are friends. A lot of these girls have been playing soccer since kindergarten, first grade on the same team,” David Barnhart said. “So to me, it's more about spending time with these kids.”

Leah has had the opportunity to have both of her parents coach her in soccer.

“Well, the thing is, my mom started off being the coach and my dad – he just couldn’t not coach because he saw my mom doing it, and he just decided he really wanted to coach,” Leah said.

Like Leah, third grader Ava Sarber is also coached by her father.

“It was a couple of dads and moms in the area, we all just wanted to put together a Eudora team and let them play with their friends,” he said.

Ava plays a variety of sports all year, including volleyball, softball, basketball and soccer.

She said her favorite thing to do during summer break is swim in her pool, but often her nights are filled with practices and games.

With both of Ken Sarber’s daughters in sports and his coaching experience, he said girls’ sports does not receive enough attention – not just locally but also nationally.

“There's still not as much advertisement out there for girls sports. I mean, you go to the KU basketball games, for example, there's not much advertised for the women's basketball team, but they had a great season this year,” he said.

“I think it's gotten worse with what's in selection and in stores. You can't buy, I mean, they went shoe shopping and they both wear women's size nines, which is big for their age 9 and you have to buy men's cleats. So then finding them without metal cleats is the next challenge,” Ken Sarber said.

These are a couple of gaps that he has witnessed that he hopes changes in the future to better represent girls’ sports.

“I think, you know, if they want to play and they have the desire to play, I want to make sure that they have the opportunity,” Ken Sarber said.

Shannon Wenger’s hope for the future of girls’ sports is similar to Sarber’s. She said she would like to see girls’ teams continue to be supported nationwide.

“I mean, girls already have the opportunity to play all these different sports and activities,” she said. “But I would love for the communities and everyone to continue to support them whether it's, you know, locally or even on national television.”

Wenger said she has seen the lack of representation in stores when purchasing athletic equipment and apparel for her daughter.

“We do find there's a much more limited selection when it comes to finding girls' apparel and including cleats and just across the board and in all items,” she said. “So we find ourselves going online a lot to have to search for whether the right type of glove or even bat for her softball. Everything typically comes from online.”

For Brynn Lorenz, she hopes girls’ sports continue to provide opportunities that create a positive impact on the community.

“I felt that Eudora offers a lot of options for our use and the surrounding communities like Lawrence and the college there also provides opportunities for young athletes or, rather, young students who want to branch out into more drama or band or other areas that they can excel at,” Lorenz said. “So I just think it's a really good community to live in and our kids are very blessed to have the opportunities that they have and it has come a long way from where it was 50 years ago.”

**A team name in this story was corrected.

Part 6: The evolution of girls sports.