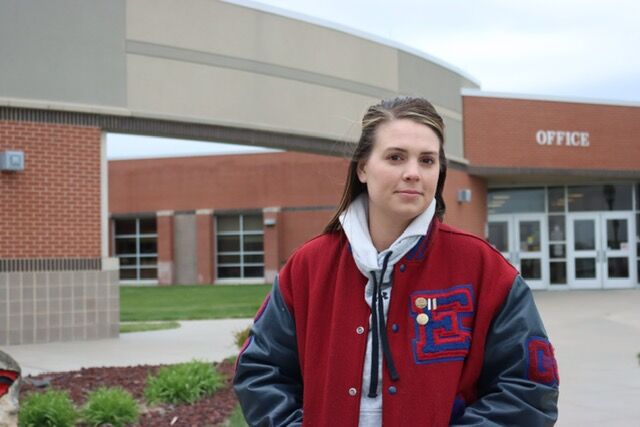 Nikki Hamilton, who played on the 2006 state volleyball team, still has her letterman jacket, which holds many memories from high school. 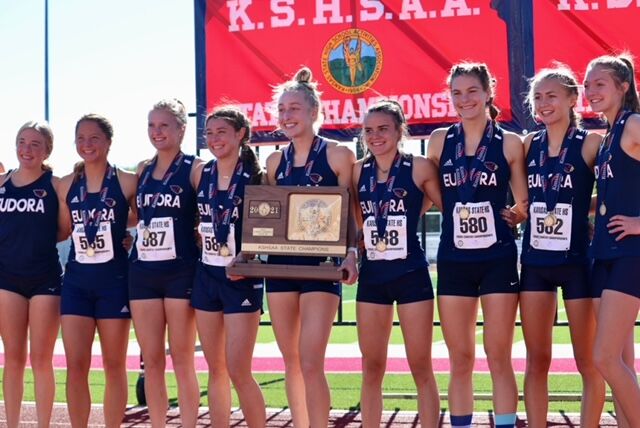 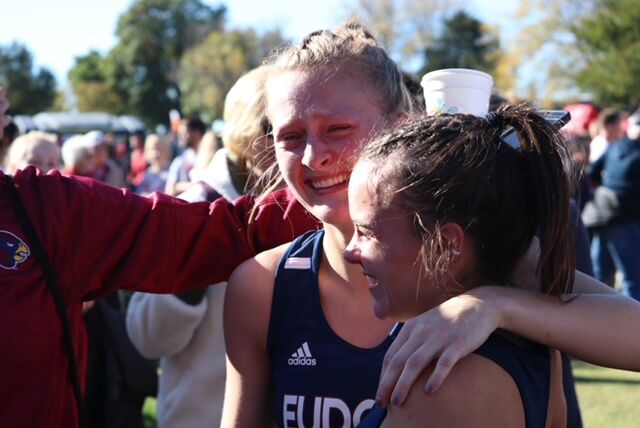 This is the seventh story in a series examining girls sports in Eudora and the 50th anniversary of Title IX.

Senior Mackenzie Mayer shared her secret to competing in a 5k every week for nearly two months and that secret is ice cream.

Mayer said the night before every cross country meet she would eat a big bowl of ice cream to prepare her for the morning.

Mayer is just one of the Eudora High School girls’ cross country runners who can say she won a state title. The 2021 team is the second team in Eudora girls’ sports history to win a state title.

The first to bring a state title back was the 2006 volleyball team.

In Jill Stutler’s 11 years as head volleyball coach, she helped pave the way for the 2006 team to make school history.

“We had a group of kids that put a lot of time into their offseason through lifting weights, playing club and just trying to make themselves better across the board with their skill level,” Stutler said. “Everything just kind of unfolded all at once.”

From the coaching perspective, Stutler said seeing her team win a state title was the ultimate reward.

“To see them celebrate and accomplish that goal as a coach, that's what you always want, is you want your kids to be successful,” Stutler said.

Nikki (Snider) Hamilton was on the 2006 volleyball team, but winning state was not the only thing she had to celebrate that day. It was also her father’s birthday.

“We were shocked, overwhelmed. I mean, first time for a very long time that the girls' sports had ever made it that far,” Hamilton said.

She remembers the feeling of walking off the court after the state championship game.

“Knowing we made it all the way and that feeling when you walked off the court knowing you won a state championship is a dang good feeling,” she said.

The team was not built overnight, Hamilton said. It took hard work and dedication to get the team to the final state games.

“You have to work for what you get, nothing is just handed to you,” Hamilton said.

Hamilton said this mentality led her to becoming the person she is today.

“I definitely wouldn't be where I am now if I didn't play sports back then,” Hamilton said.

Erin (Kracl) Grindinger was also a senior on the state team. She said her interest in volleyball began in fifth grade while watching her older sister play in middle school.

“My older sister was real big into sports and was a pretty big tomboy,” Grindinger said. “She used to try to force me to play sports with her, and I actually like despised it.”

Grindinger’s mom worked at the middle school, so Grindinger would hang out at her sister's volleyball practice, which was when she fell in love with the sport.

“And so I started staying and was at her practices because it was something more fun to do than sit in the office with my mom and then I just really started to love it,” Grindinger said.

During Grindinger’s sophomore and junior years, the team made it to the sub-state games but lost before making it to the final game.

“Sub-state was our goal and then I think after that first year, it was like sub-state was no longer good enough, you know, we wanted to win state,” Grindinger said. “And then we went again the following year, and you know, didn't obviously didn't come back with it. And so it was bittersweet happening my senior year.”

The volleyball team went 40-7 that year and defeated August High School for the state title.

The 2006 volleyball team made ripple effects in the community, which Grindinger said could be seen not just from the student body but from Eudora residents as a whole.

“It was absolutely crazy the support we had like all the years that we went to state,” Grindinger said. “We had so many fans. It was great.”

“What was cool for me is I was out eating that night and a stranger came up to me at Barbwire and said, ‘Hey, congrats on your state title,’ and I was like, ‘Oh dang, people actually know about this,’” Whalen said.

Keltner said she knew the pressure of entering as a freshman on varsity, but she was prepared for the season.

“We all knew we had a really good chance, so we went to all these big meets so that we could get some competition and we could see what it's like competing against faster people,” Keltner said. “And I feel like that really helped us in the long run because at state we were competing against the best of the best and so we knew we had to run our best, which we were already doing the entire season.”

Whalen said she gets asked often why she participates in cross country and her answer is the “runner’s high,” she gets after finishing a race.

“You know, you can do more than most people, like if you do cross country you are a different breed of person,” Whalen said.

Senior Maya Pattison said winning state was something like she would watch on the big screen.

“We finally did it and it happened to be our senior year, which couldn’t have been better, like a movie,” Pattison said.

For senior Ellie Barnard, training for cross country began even before she entered high school, due to her father being the head cross country coach the past five years.

“I grew up going to meets and so my dad's my coach, too, so it just kind of happens naturally,” she said.

One common theme among all of these former and current Eudora athletes is the hope for future teams to bring more state titles back to the school.

“You don't always hear from a small town and knowing that one team did it, it is possible. I mean, you set the bar, you go for it, you put in the work, anything's possible,” Hamilton said.

Part 6: The evolution of girls sports.

Part 9: Young girls explore what participating in sports means to them.