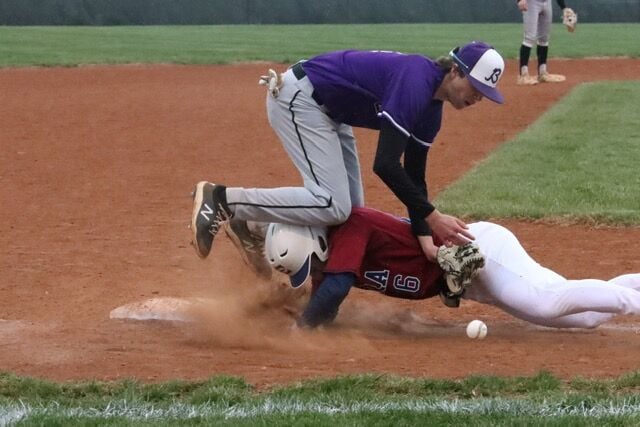 Junior Bryce Clark takes a dive for his base. 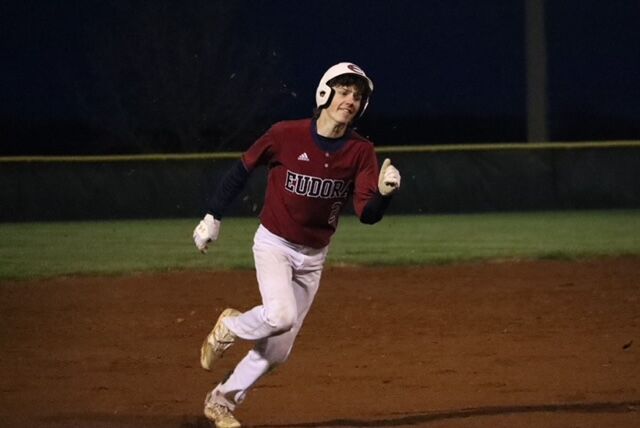 Freezing fingers and muddy cleats weren’t enough to stop the Cardinals from victory on their senior night.

Inning to inning, both teams put on a great show. Ultimately the Cards came out on top with two much-needed runs deciding the game’s final score of 7-4.

Light rain peppered the diamond throughout the night but over time the wet dirt and slippery surfaces caused some of the players to work harder for the win. The wet dirt turned to mud and was not doing any favors to both teams.

Players in the box spat remarks about the weather conditions, saying the water was affecting their throws or how they could sprint. Some called the conditions “dangerous.” Senior Camden Ridinger knew the weather was less than ideal but did not affect his confidence in the win.

“You gotta be gritty really. We have to go out there and whatever happens, happens. We had to go to the ball instead of letting it come to us and finish our throws,” Ridinger said.

Successful throws are what helped the Cards win in the end. In the first inning, the Cardinals were able to score five runs, granting them a hefty lead against Baldwin’s one. As the night continued, the guest team inched its way closer to a lead and by the fifth inning the score became 4-5.

The boys got their big break in the last moments as two players were able to score and cement the confidence yet again. Pitcher and senior Trenton Long was happy to see his team come out on top and celebrate all their accomplishments.

“It was a great game and a great team performance. We hit well and took advantage. I’ve played with a lot of these guys for a lot of years. It's been a great time and season, and I'm looking forward to the rest,” Long said.

Long also gave praise to the performance of Baldwin’s team.

“I think they played very well. They hit me a lot better than I was expecting them to come out so hats off to them, ” he said.

Head coach Sean Jarvis held his head high with his players when the game came to a close. He recognizes the journey he has had with the senior players and is excited for what is to come.

“They come out and battle every day. We got new things going on this year, and they give me everything they got. This win was for them,” Jarvis said.

The Cardinals will continue their battle Tuesday against the Ottawa Cyclones at home.