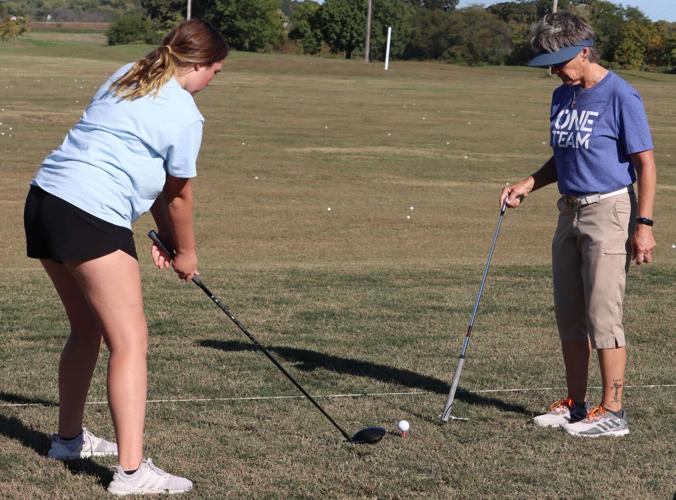 Junior Olivia Lawhorn prepares to take a swing during practice Thursday afternoon with her coach Susan DeVoe guiding her to the right approach. 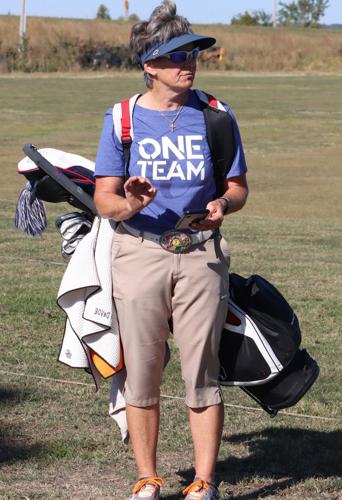 Girls golf coach Susan DeVoe talks with her team prior to practice Thursday afternoon at Twin Oaks Golf Complex looking to start practice off on the right note.

When girls golf coach Susan DeVoe first started playing golf in 2005, she wasn’t sure how far she could excel despite her always having an interest in sports as a whole.

Winning this tournament comes as a relief for DeVoe, who has attempted to take home the crown over the last several years while coaching the Eudora girls golf team.

“It's very nice to win that because I've been after that trophy for about seven years,” DeVoe said. “I am now very pleased to have my name on it.”

She knew she had the drive and work ethic to get good at golf quickly, and she felt the sky was the limit about where her game could end up.

Once DeVoe figured out the fundamentals, she started competing right away, joining the Alvamar Golf Club in 2010 and then getting fitted for clubs soon thereafter.

Picking up golf for DeVoe became easier as time progressed, as she felt this sport would be easier to start than most others she may have tried.

“Well, because I’m athletic, it was easier probably than most, but I just was hitting the ball around,” DeVoe said. “I've been using my dad's old Tommy Armour and I think everybody played with those. That’s (2010) when I got serious about it.”

Since winning the Senior Amateur earlier this week, the players are impressed with their head coach’s victory, but also knew she had the talent and hard work to take home the trophy representing Eudora.

Junior Olivia Lawhorn has been with DeVoe since the program was established, and continues to be amazed with what she does on the course, and winning tournaments such as the Kansas Women’s Senior Amaetur.

“I’m not surprised,” Lawhorn said. “She is the most incredible golfer I know. It's really nice to know that I have a golf coach who really knows what she's talking about. It’s just incredible.”

Senior and fellow teammate Bree Gabel shares that same opinion, understanding how this victory can influence the rest of the team heading into postseason play in the coming weeks.

“She puts in work all the time and after practices,” Gabel said. “Sometimes I go to golf with her, and I think it was amazing because she did a really good job.”

As the team prepares for the rest of the season over the coming weeks, DeVoe looks forward to seeing what they can do in the postseason, but also to future tournaments that she plans to participate in during the winter months.

After this season, DeVoe looks forward to winter break when she plans to go to Florida and play in tournaments.

“I started this team because there was no team and that’s why I’m doing this now,” DeVoe said. “I'm closer to retirement age so once I retire, that's (playing tournaments) all I will do.”

The girls golf team’s next match will take place at 3 p.m. Tuesday at Heritage Park in a league match for the Cardinals.