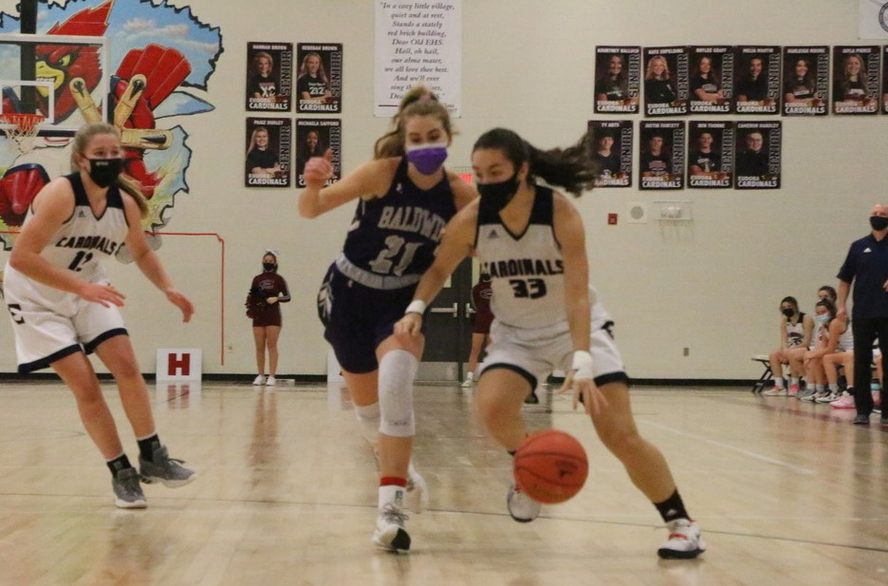 Melia Martin drives to the hoop. 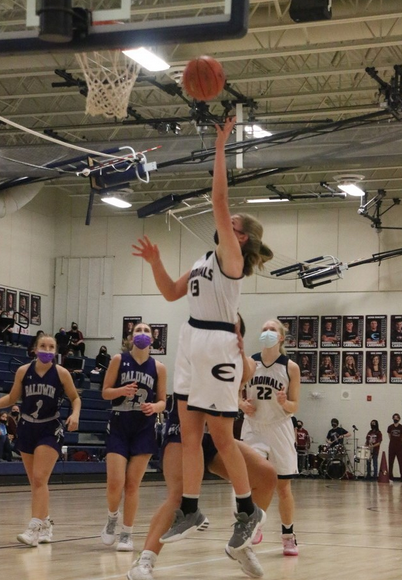 Jayla Pierce scores a layup through contact for the and one.

The Eudora girls varsity basketball team found their groove in the second half, coming up with a win over the Baldwin Bulldogs Thursday night.

Offense in the second half was at the core of the Cardinals’ win. Junior Harper Schreiner led the way with 22 points and junior Jayla Pierce poured in 10.

Schreiner broke the team’s cold spell when she pulled up and knocked down a three in transition to take a one-point lead with just over two minutes left in the half.

“For me, that was just a spark I needed,” Schreiner said. “I just needed a shot to go in to get me going. It got the team going, the bench went crazy, and it really just helped us finish through the game.”

Mackenzie Mayer followed up with a three of her own to give the Cardinals a 22-18 lead going into the half. Eudora scored quickly to open the third quarter and held a 26-20 lead. Baldwin was able to rebound from their slump with a three on consecutive possessions to tie the game.

Eudora continued their theme of finding offense late in the quarter and took advantage of Baldwin turnovers as they went into the fourth with a 38-32 lead.

“Maybe it’s just that part of the quarter where we get five players that are feeling comfortable and they get into a little bit of a rhythm,” head coach Brandon Parker said. “If that’s the case, I would love for us to do it maybe seven minutes.”

The Cardinals had no problem generating offense to open the fourth quarter and jumped out to a 45-34 lead. Baldwin began to crack away at the double-digit lead from the free throw line, but Eudora’s lead was too much to overcome late in the fourth.