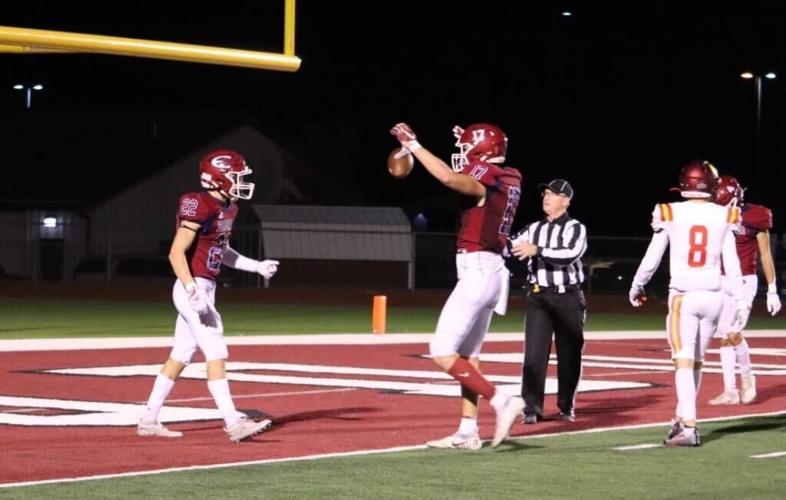 Junior Matthew Magette, left, and senior Jaden Hamm celebrate after Magette scored a touchdown on a 20-yard run. The Cardinals combined for five rushing touchdowns on the night. 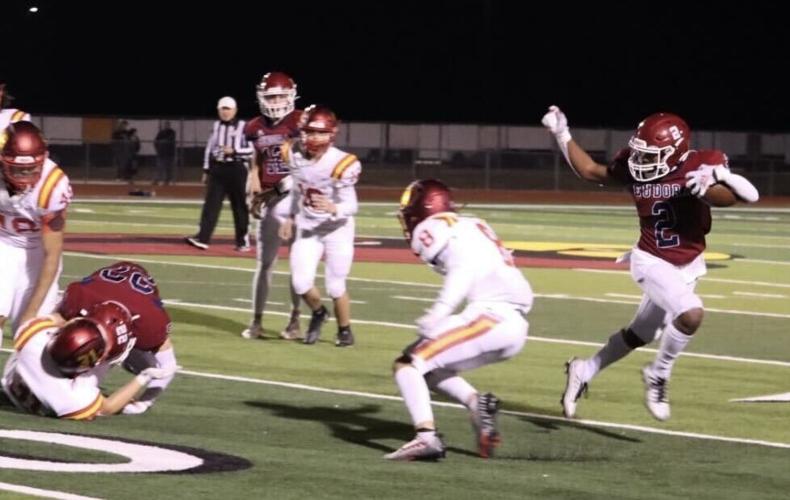 Senior Octavius Lyles makes a defender miss as he cuts to the outside. Lyles scored three touchdowns against Labette County.

Junior Adrion Seals was looking for a lane as he sprinted toward his own sideline during his first punt return of the night.

While he didn’t exactly find a hole, Seals hurdled over a would-be tackler to pick up an extra few yards to set up the offense with great field position.

A few plays later, senior Octavius Lyles made a nice move of his own to make Labette County’s safety miss on the tackle to score from 39 yards out for the first touchdown of the night, only a few minutes into the first quarter.

“Once you start rolling, it’s really hard to catch back up,” Seals said of the fast start. “They had a couple of mistakes, and we just fed off that and got up early.”

The Cardinals kept their foot on the gas throughout the first quarter. Two plays after Lyles’ touchdown, sophomore Errol Siemon picked up a fumble and returned it for a touchdown.

Then after the ensuing kickoff and a three-and-out by Labette County, Lyles scored again, this time from 26-yards out, on the second play of the Cardinals’ possession. The Cardinals scored these three touchdowns in a span of 11 plays, making their lead 19-0 only halfway through the first quarter.

“I think that for our kids to get out and play with the speed that we play with on both sides of the ball, you know, get in the endzone, get stops early, is really, really good for us,” head coach Drew Steffen said. “If we can get off to starts like that the rest of the postseason, we’re going to really, really like where we’re at.”

The Cardinals never looked back after the hot start as the team ended up beating Labette County 54-22 in the first round of the postseason.

The team was dominant in all three phases of the game Friday, and Seals was a key contributor to that success.

Seals helped the offense by setting up the team with good field position several times. Much like his first punt return, Seals gave the Cardinals a short field by forcing defenders to miss and picking up extra yards on his second punt return. Seals used his speed to find the edge and get around the outside to make the most of the return.

Then on defense, Seals reeled in an interception on a deep pass from Labette County’s quarterback. Seals put a spin move on a tackler to pick up some extra yards before being forced out of bounds. The interception and return set up a 30-yard touchdown run by Lyles, his third touchdown on the night.

Seals even scored a touchdown of his own from 33-yards out on a screen pass thrown by junior Kole Manley. Seals gave credit to his teammates after his performance.

“I might look good in the moment, but you know, it’s other people,” he said. “All the passes, you know, I wouldn’t do it without lineman. On defense, I had a couple interceptions. But again, maybe that wouldn’t have happened if the d-end or our defense didn’t get to the quarterback who threw it in the air.”

Seals only had the one interception, but he also recovered a fumble late in the first half to shut down a Labette County drive before halftime.

As usual, the Cardinals’ run game and pass rush were crucial to the victory as well.

The team combined for five touchdown runs on the night. Lyles had his three, Manley had one from 16-yards out, and junior Matthew Magette had one from 20-yards out.

The defense combined for four sacks with seniors Jaiden Bender and Jaden Hamm each having one apiece. Hamm also knocked down a couple of passes at the line of scrimmage. Steffen was happy with the way the offensive and defensive lines played.

With the score 54-0 by halftime, the Cardinals were able to pull their starters in order to keep them healthy and get younger players some postseason experience.

“It’s huge to get guys healthy and keep guys healthy, there’s no doubt,” Steffen said. “It was encouraging to get them in the game, you know, they did such a good job over the course of the week having given us a look. So, to reward them with playing time on Fridays is awesome.”

The Cardinals move on to the next round where they will face the team that knocked them out of the postseason last year: Bishop Miege.

“I’m really excited for that game,” Manley said. “We want our revenge game, and you know, we got them at home again this year. I don’t think there’s anything else we could ask for.”

The game is set for 7 p.m. Friday in Eudora. Here is the 4A postseason bracket.

To donate to support our community journalism, please go to this link.