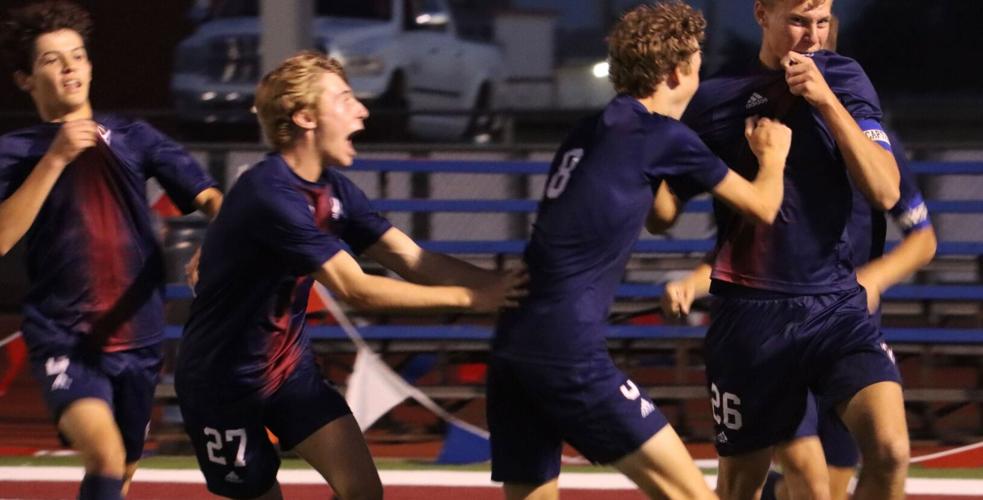 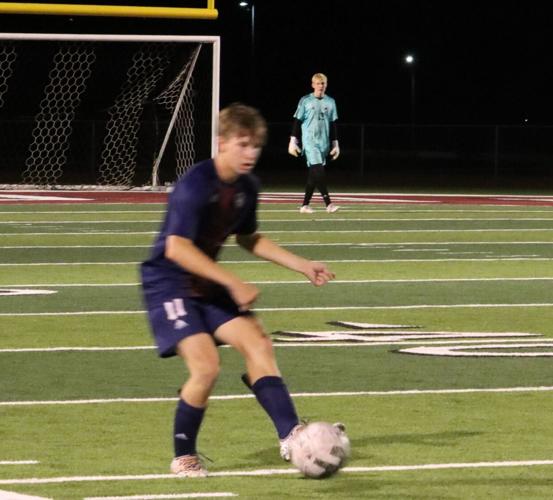 Junior Kaden Kerr dribbles the ball against Basehor-Linwood Monday night in an effort to tie the game for the Cardinals. 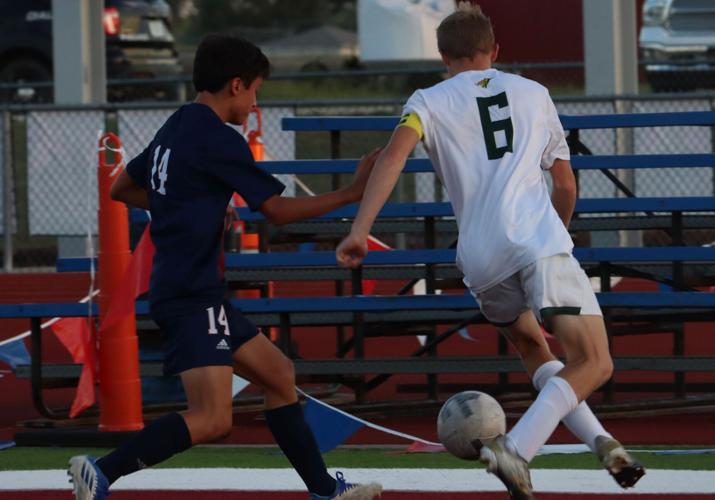 Junior Sergio Medrano battles for the ball looking to prevent the Bobcats from having a scoring opportunity.

In a back-and-forth battle that featured over 80 minutes of play, the boys soccer team fell in overtime to Basehor-Linwood 2-1 Monday night.

The Cardinals (1-5-1) rallied from a 1-0 deficit after senior captain Parker Hurla headed in the ball to the top left corner of the Basehor Linwood net early in the second half, tying the score at one apiece.

However, the Bobcats won the game on a game winning penalty kick in the opening minutes of the 10-minute golden goal overtime period, marking the end of an aggressive match between the two squads.

Despite a tough loss, the Cardinals played better as the game went along, with the second half providing a spark after a slower first half, leading to the game-tying goal.

“I thought in the first half we played flat, we allowed them to take the game to us,” head coach Darren Erpelding said. “The second half was much better. I think they might have had some of the better chances. But our guys played gritty.”

To start off the match, the Bobcats applied early pressure to Eudora, and eventually cashed in midway through the opening 40 minutes, putting one home from just outside the penalty box, giving themselves the early 1-0 lead.

Even though Basehor-Linwood had more chances to score early, Eudora’s defense and goaltending kept themselves in it heading into the second half, as sophomore goalkeeper Nate Steinlage made several crucial saves to keep the deficit at just one for the majority of the night.

During halftime, the players knew what they needed to do to come back, and therefore came out of the locker room with a sense of urgency, knowing this was their game to win.

“We could have done a lot better in the first half,” junior defender Christian Koehn said. “But once we came in here (locker room), it really showed us that we needed to come as a team. We needed to start doing something to put a game together for our fans.”

In the second half, it was Hurla who netted the equalizer with his header hitting the top left corner of the net, sending his team and fans into a frenzy as the Cardinals knotted up the score at 1-1 early into the second half.

“I saw the ball go up in the air and I got some space and headed the ball to the back post,” Hurla said. “I was scared the goalie was going to come out and get the back of my head, but he wasn’t there. He wasn’t in his spot so I took advantage of it.”

The final 30 minutes of the second half featured aggressive play from both sides, but neither team broke through, forcing the game to a sudden death overtime period, in which the first team to score wins the game.

Just a few minutes into the first of potential two overtime periods, a trip on a Bobcat attackman took place inside the box, giving a penalty kick to Basehor-Linwood with a chance to win it with a golden goal.

Despite a solid attempt from Steinlage, the ball squeaked by his outstretched arms and went into the back of the net, handing the Bobcats the overtime victory Monday night.

In spite of the tough overtime loss, Erpelding feels there is a lot to build on for a team that is continuing to improve as they head into league play over the next several games.

“I'm proud of them for responding after I challenged them at halftime,” Erpelding said. “If we can have that effort every single night out, we're going to win a lot more than we lose. We haven’t had that effort all year long.”

The team plays its next match at 6 p.m. Thursday at home against Baldwin in the second of three straight home matches for the Cardinals.