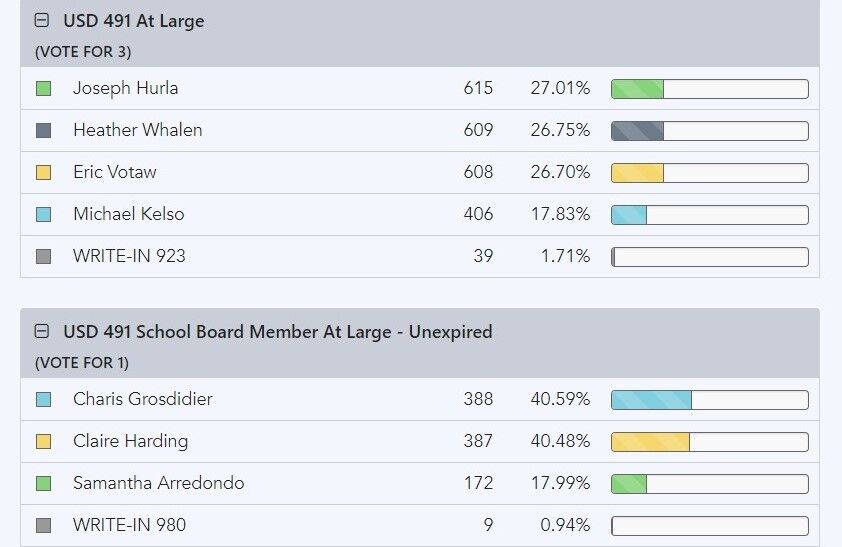 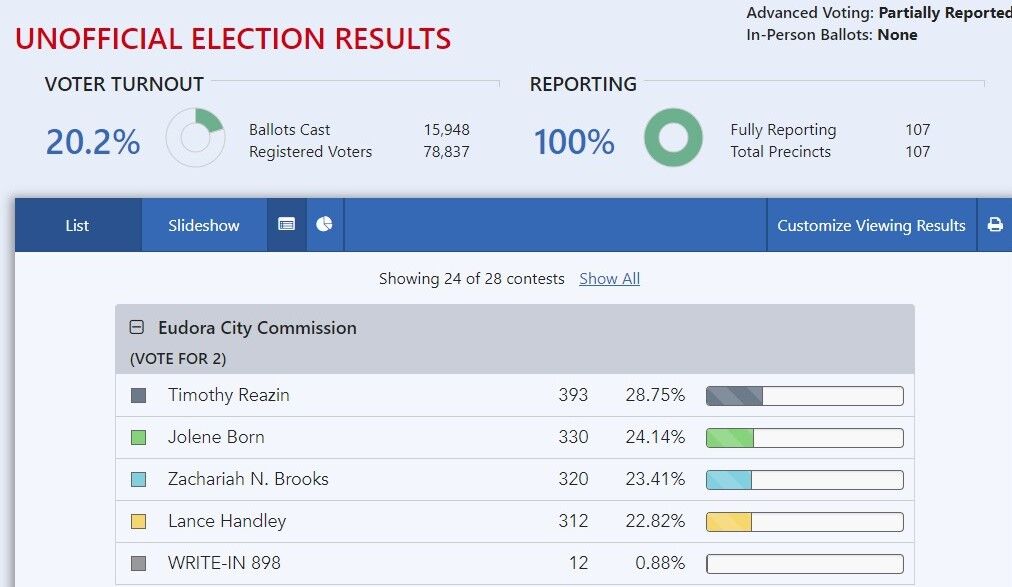 Only 1 vote separates Charis Grosdidier and Claire Harding in the School Board race for one open seat as of Tuesday evening.

Douglas County has reported that unofficial election results are now up with 100% of precincts reporting. However, any advance ballots postmarked by Tuesday and received by Friday are counted. The canvass to finalize election results will be Nov. 15.

Grosdidier leads with 388 votes to Harding’s 387. Incumbent Samantha Arredondo has 172 votes. There were nine write-in votes for this race.

Harding was substitute teaching Wednesday morning, having to await the results from her classroom.

“This is closer than the close race that I anticipated, but there’s lots of Douglas County votes still to be counted. I trust the process. I trust the county clerk’s office to get this done correctly – get it done right – and I’m sure we’ll have a clearer picture at the end of the week,” she said.

Harding said she is optimistic on the results, and is thankful for those who showed up to vote this week. She wants the School Board to know that she is “ready to get to work.”

Harding said if elected, she will work to represent everyone in the community, regardless of whether or not they voted for her.

“I would like [them] to know that I will listen. That’s my primary responsibility: to listen to what I’m hearing in the community, to the staff and to everyone who’s given me the job,” she said. “We’re policy makers, we are financial managers, and overall we need to be good stewards.”

As of Wednesday, Harding had pulled ahead in the vote by 12 votes. On Thursday, Grosdidier said she is thankful for those who voted in this election, and is pleased with the turnout this year.

If elected, she will be excited to begin her position on the School Board, and wants people to feel welcome to speak to her regardless of who they voted for.

In the other School Board contest, incumbents Joseph Hurla and Eric Votaw will keep their seats with 615 and 608 votes respectively. Newcomer Heather Whalen will claim a seat with 609 votes. Michael Kelso received 406 votes. There were 39 write-in votes.

“Obviously I’m a bit disappointed, but I never ran for my own benefit," Kelso said. "I always ran to continue the great work of the Eudora School District, and I wish the new board good luck in keeping that up.”

Hurla said he's excited to be able to continue to serve another four years.

“We have a lot of unfinished business," he said. "We started a lot of great things, and I’m excited to continue to work with the new superintendent and at least one new board member in addressing some of those priorities.”

Votaw said he appreciates all of the support he's received.

“All of the folks that I’ve had the chance to talk to over the last couple of months – it’s really been heartwarming to know that there’s so many people who want the same for Eudora schools, which is just opportunity for kids and just a great experience,” he said.

In the city race, incumbents Tim Reazin and Jolene Born lead for the two-seat race with 393 and 330 votes. Zach Brooks trails by 10 votes at 320, while Lance Handley has 312. There were 12 write-in votes.

“I’m excited to continue the things that we’ve been working on for a number of years,” Reazin said. “I have confidence in my abilities and the rest of the city commissioners’.”

Born said she was "thrilled" with the results.

“It was a really close race and the other candidates were wonderful as well,” Born said. “I’m looking forward to continuing to help and serve the people of Eudora.”

Brooks said Wednesday morning that the results were "a little disappointing."

“But I feel that the individuals that were running for City Commission all have the best interest of the city at heart. I feel like the city will being moving in the right direction,” he said.

Handley said Reazin and Born will "continue to do a great job."

"The City Commission is a position to represent the citizens of Eudora, and the citizens voted in who they wanted representing them," he said.

Check back with us Wednesday for more reactions from candidates.