This mockup depicts the apartment buildings planned for the new development. City Manager Barack Matite said plans are always subject to change, however. 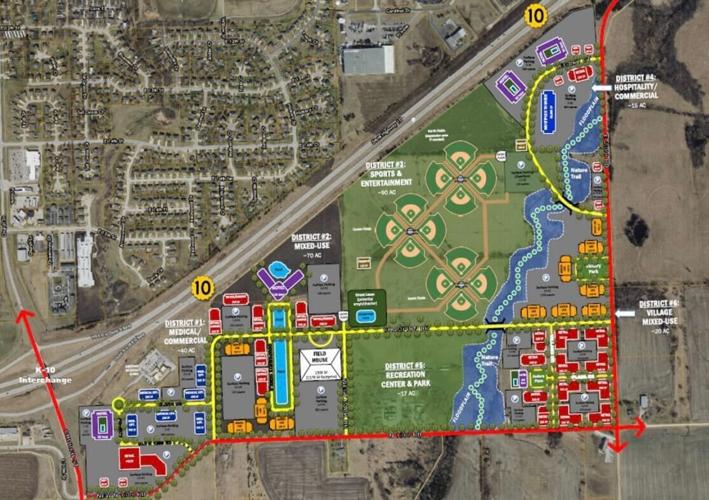 This map shared during Wednesday’s presentation shows where the new development will be located in relation to K-10. 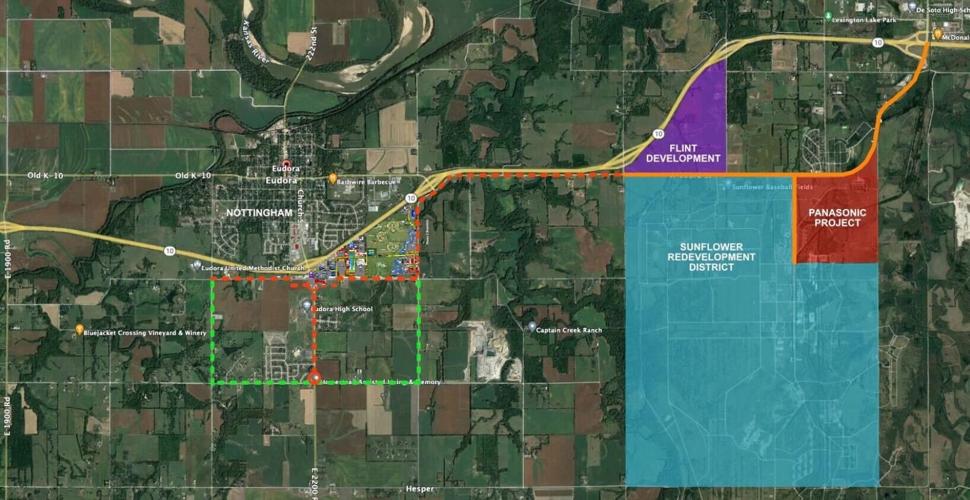 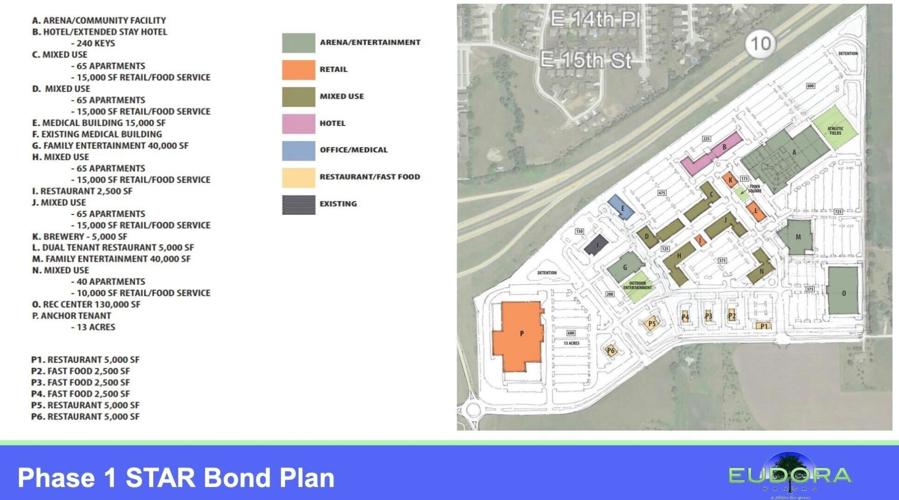 Commissioners viewed this information during Wednesday’s presentation, which includes what businesses will be located in the development, including a recreation center, brewery and multiple restaurants.

A new sports and entertainment arena may call Eudora home soon, if all goes according to plan.

City Commissioners viewed a presentation Wednesday from City Manager Barack Matite and two other businessmen involved in planning a new project that could boost economic development in Eudora.

The development will be south of K-10. A sports and entertainment arena will be the focal point, with a new recreation center, retail spaces, restaurants, apartments, a brewery and a hotel surrounding it.

Events expected to take place in the arena include basketball and volleyball tournaments, MMA events, concerts and theater performances.

Over 36,000 square feet is expected for restaurants, with the plan noting fast food works well due to the nature of sports schedules. However, speciality breakfast shops like bakeries and cafes are also recommended as a draw for families.

If new businesses flood the areas surrounding the Panasonic battery factory, Eudora will need to be proactive, Matite said.

“We don’t want to react to growth. We want to control it,” Matite said.

Vieste LLC CEO Michael Comparato and William Crandall of CBC Real Estate Group were present to answer questions from commissioners and explain the project more. Comparato said Panasonic increases the need for this kind of project.

“[Employees] are going to live and play somewhere where they work, and we’re a natural home for a lot of those folks,” Comparato said.

Mockups of the development were included in the presentation, and highlighted accessibility. The entire area will be walkable and bikeable, Comparato said.

According to the presentation, the arena will hold up to 5,000 people, cost $40 million to build, and the top line revenue is estimated to be over $5 million a year.

It is estimated the arena will attract over 500,000 unique visitors a year, with an average visitor coming from anywhere within four hours of Eudora.

Sales Tax and Revenue (STAR) bonds will likely make this project possible. This tool is available to Kansas cities and allows “municipalities to issue bonds to finance the development of major commercial, entertainment and tourism projects,” according to the Kansas Department of Commerce.

Once the projects are constructed, the sales tax revenue they generate pays off the bonds.

The city plans to complete several tasks before March 2023, including annexing land, a feasibility analysis and creating a sales tax increment model.

Comparato said the group is currently in the pre-application phase, with formal district designation, STAR bond plan approval and project funding to follow.

It is important the public has access to accurate information about this development, Mayor Tim Reazin said. Matite said the city website will be updated soon with facts about the development and the STAR bonds.

Reazin also highlighted a recent grant of over $900,000 given to Eudora from the Kansas Department of Transportation, which will go toward the construction of the K-10 and Church Street Shared Use Path.

“For 10-plus years, we have worked with the state to try to get some kind of crossing over K-10 for kids and families,” Reazin said. “It’s been a long time of talking with KDOT, and for that to finally happen is pretty cool.”

Commissioners entered into an executive session following the public meeting to discuss preliminary acquisition of real property, related to the STAR Bond project. Following this session, the meeting adjourned.