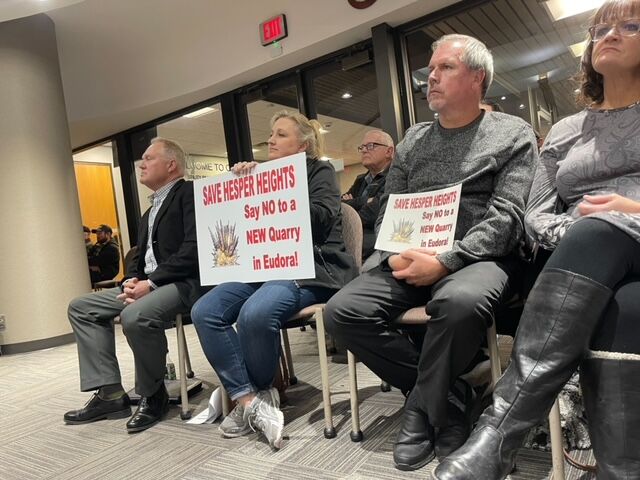 A full room turned out Wednesday night to voice concerns about the quarry permit. 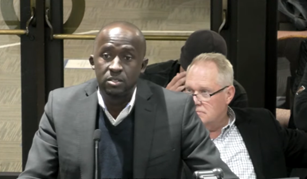 City Manager Barack Matite discusses how the city is having to adapt its prior comprehensive plan to adapt for the unexpected growth from Panasonic. 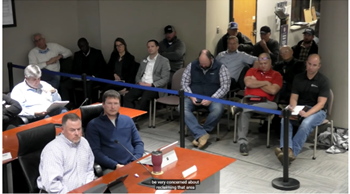 After nearly four hours of discussion, Eudora residents convinced two planning commissions to recommend denial of a conditional use permit for a quarry that would lie just outside city limits.

The business was proposing a limestone quarry on a 242-acre parcel with frontage on North 1200 and East 2300 Roads. The application notes no more than 50 acres would be open for quarrying activity at any time, according to the agenda packet.

The quarry is south of the Hamm Quarry and within three miles of Eudora city limits.

About 20 people attended either in person or over Zoom to comment, with nearly everyone against the proposal. Eudora Planning Commissioner Johnny Stewart said 36 pages of letters were also submitted that commonly expressed concerns about environmental and personal health issues.

McGrew Real Estate Realtor Caren Rowland asked who would want to invest their money to build residential and commercial areas so close to blasting every day for 20 years.

“With Panasonic being built six miles from the site, needing thousands of workers and spin-off businesses coming, Douglas County commissioners cannot allow this to happen in our area where it will affect thousands of Eudora residents in a negative way,” she said.

“Our town is going to grow. Our city leaders are trying hard to do it right. It’s going to be hard and painful at times, but our town doesn’t deserve this type of problem,” she added.

Keith Turnbaugh said it was “a fallacy” that a new quarry is needed in Eudora.

“All of us in Hesper Heights are supposed to make the ultimate sacrifice of our homes, our way of life and the future growth of Eudora just so Mid-States mining can make a bigger profit on selling gravel,” he said. “They do not care that everyone is against the quarry.”

“We are the voice of the people so I’m asking you to please listen to the voice of the people as elected officials,” she said. “The traffic coming through that road is so significant, and adding bigger trucks with inexperienced drivers makes me worry that it will take a child being killed before we make decisions on how to reroute this traffic.”

Jennifer Dunn said she spoke as someone who lives in the neighborhood and bought their home to raise their grandchildren in the area.

“We want to have our area where we can ride our bikes with our grandkids up and down the dirt roads, take our dogs on walks, enjoy nature and watch the animals in the area,” she said. “That’s the area we want and what we want others to experience with growth. We don’t want this to impact that area whatsoever.”

Eudora Planning Commission Chairman Grant Martin said he had “a really difficult time” with the proposal.

“I feel that the city of Eudora is definitely kind of at a detriment in this situation. I think the citizens are at a detriment, future citizens, and I would seriously have you consider looking for another place,” he said.

Mid-States Materials representative Rich Eckert said the quarry is needed with all of the growth patterns being discussed in the area.

“I think we all know the market’s going to grow for the limestone. That’s just a fact,” he said. “Panasonic is going to drive that and all the things that come around Panasonic.”

Eckert also discussed concerns about property values with a quarry nearby.

“What we hear at these meetings is, ‘It’s going to destroy my value.’ They don’t say destroy, but you know what I’m saying. It’s going to harm my value,” Eckert said.

He pointed to national data that there would not be an impact on property values as values in other areas had increased over time.

Eckert also had a video play that showed the company’s reclamation efforts, saying they were a two-time national champion in reclamation and would submit a reclamation plan to the state and county.

“Of all the counties we’re in, it’s safe to say Douglas County CUP (conditional use permit) and regulations are the toughest that we have,” he said.

City Manager Barack Matite said the city is trying to be intentional about its growth, particularly toward the south, so that “we can be able to direct it and shape it and still maintain the quality of life that our residents want.”

“You’ve got this unusual natural resource sitting just outside your town that is unique, is needed to provide the materials for the very growth that you’re talking about,” Rexroad said. “If you don’t do this, you’ll lose access to that probably forever, you know, if you build right up to it or build over the top of it.”

Matite said each community has to decide where it grows, and the city knows housing is going to be an issue with all of the upcoming Panasonic development. Along with that, the city has to keep in mind infrastructure, parks and related amenities to maintain quality of life, he said.

Matite said the quarry is too close to where the city foresees its growth.

Lawrence-Douglas County Planning Commissioner Charlie Thomas said it was clear 99.9 percent of the people speaking and the city of Eudora didn’t favor the proposal.

He asked to hear more from Mid-States about resident concerns about dust and health issues.

Eckert said the company has the “best dust suppression system” that can be bought, with water constantly spraying during crushing and a water truck on site at all times. The county can come out at any time to do inspections, he said.

“We have a very sophisticated method of suppressing dust,” he said.

Eckert noted there is already a quarry in the area that is already part of the neighborhood’s character and that was previously approved.

Martin said there’s room to further use the existing quarry and that everyone needs to consider Eudora’s long-term goals.

“Rooftops create tax dollars. As I think about adding another quarry, it just doesn’t make sense to me when the one that we have currently is underutilized,” he said.

“We have an existing quarry. Do we need another one? I think the citizens of Eudora said no. The Planning Commission is concerned with our growth area, and I think we’re saying no,” he said.

Rexroad of the Lawrence-Douglas County Planning Commission was one of the commissioners to vote against the motion to deny the permit. He said there didn’t need to be a vote Wednesday night and that the company had spent significant time and money to this point and should have time to address concerns that came up.

The recommendations to deny the quarry’s permit next go to the County Commission.

Reach The Eudora Times at eudoratimes@gmail.com