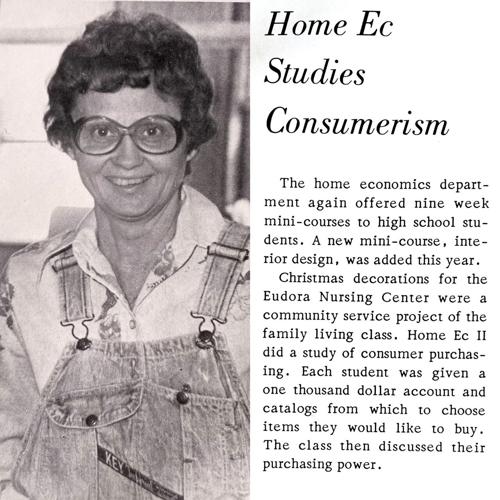 Steven Richardson shared photos from the 1977 class yearbook for this story. This is a photo illustration combining two of those images into one. 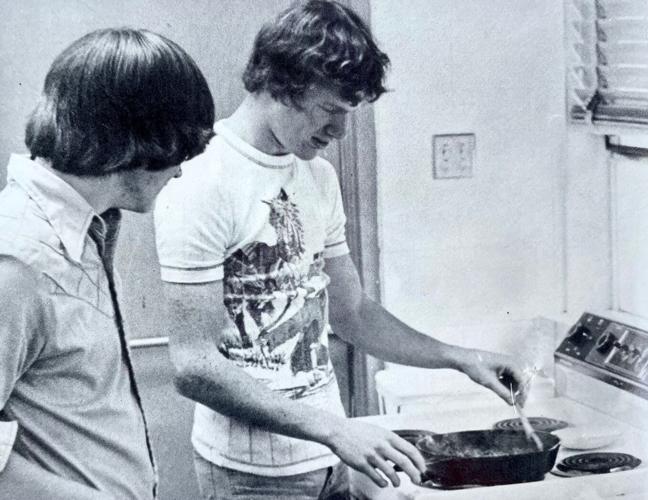 Home ec students cooking in the classroom. From the 1977 yearbook. 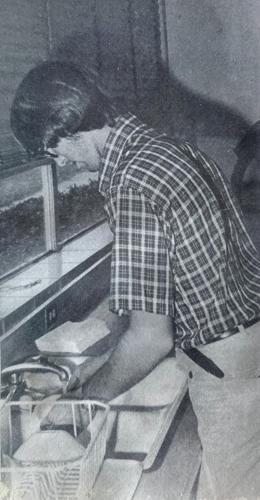 A student cleans up during home ec. Photo from the 1977 yearbook.

Over 45 years later, Steven Richardson still remembers how Gloria Darlene Hanks Slapar’s home ec class taught him how to cook, grocery shop on a budget and sew a button on a shirt.

“She was hands on right there right beside you and each person in her class got a one-on-one, very up close and personal experience with her,” Richardson said about Slapar’s class.

Slapar’s death Saturday prompted many former students to recall memories of their home ec teacher, who taught for 37 years at Eudora High School. She graduated from Kansas State Teachers College, now known as Pittsburg State University, in 1953 with a degree in home economics, according to her obituary.

Right after, her family moved to Eudora where she taught until 1990. She was named teacher of the year in Eudora in 1972 and 1980.

Richardson took Slapar’s bachelor cooking class as a junior in 1976. He said her class prepared him for the real world after high school.

“We started out really basic and then we worked up to stuff. By the end of the course, guys were making cakes and grilling steaks and stuff like that,” Richardson said. “Yeah, it was good to learn. It's something that, you know, carries through your life.”

Richardson said he remembers Slapar as a mother-like figure to the students and as someone involved with the school and community.

“She had classes make Christmas ornaments for the nursing home. She was in touch with, say, the drama department to help make period costumes for the play and stuff like that. They all kind of blended together all the departments and stuff,” Richardson said. “Yeah, she was a big part of a lot of people's lives.”

Cindy (Carter) Allen took Slapar’s home ec class before graduating in 1977. Allen said this class was where she learned several cooking recipes she still uses to this day.

One of Allen’s favorite recipes she learned from Slapar is a breakfast dish that includes shredding potatoes to create a hash brown consistency and adding eggs to the dish.

“It's one of my family's favorites, you know, growing up because it was so easy,” Allen said. “Of course once they started coming out with frozen hashbrowns, you didn't even have to peel, you know, and shred the potatoes yourself.”

During her time at the high school, Slapar taught students soft skills like how to cook a variety of dishes and sew.

Allen said she remembers not only cooking during class but also the chores that followed.

Allen described Slapar’s teaching as practical and that the class prepared students for life after graduation. For Slapar herself, Allen said she was patient with all her students.

“She was very patient. She had to be, you know, with trying to teach cooking to a bunch of young high school students in the ‘70s who thought they knew everything,” Allen said. “But she was very patient. She tried very hard, I think, to make us try recipes that would last with us through the years and things that were very practical like that.”

Shirley (Broers) Lowrey’s relationship with Slapar began even before she entered high school. She was neighbors with the Slapar family.

“I didn't see her so much as a neighbor then but this dance teacher, and how well she did with a bunch of eighth graders trying to learn how to do some ballroom dancing and that was a lot of fun,” Lowrey said.

Lowrey graduated high school in 1966 and remembers Slapar’s home ec class where she sewed a hot pink apron and cooked hot cereal. Lowrey recalled a prank another student did during class, which was switching the salt and sugar while cooking hot cereal.

“Somebody put salt in the sugar bowl and, of course we were all trying to cover up our hot cereal with sugar and turned out to be salt but she made us eat it anyway,” Lowrey said.

Susan (Musick) Carnagie graduated from high school in 1981. During her time in junior high and high school, she was able to take Slapar’s class several times. What she remembers most from the classes is the cooking tips, such as how to separate the egg yolk from the egg white.

“I kind of pass on cooking with my grandkids, you know, ‘Well, my home ec teacher said to do it this way,’” Carnagie said.

“I still have mine. I was gonna pass it on to my grandkids,” Carnagie said.

Gwen (Yarnell) Longbine took Slapar’s class her sophomore year and recalled that she was “such an amazing teacher” with sewing, cooking and life skills.

Longbine remembered when Slapar gave the class a budget. Students had to work with a partner to go to the grocery store and choose healthy food. Outside of class, Slapar allowed students to spend lunch break in her classroom playing the “Saturday Night Fever” album and Bee Gees on a record player.

“A very talented woman who made a positive impact on so many students,” Longbine said in a Facebook post.

Our newspaper depends on your donations to provide coverage of Eudora and continue providing local news.