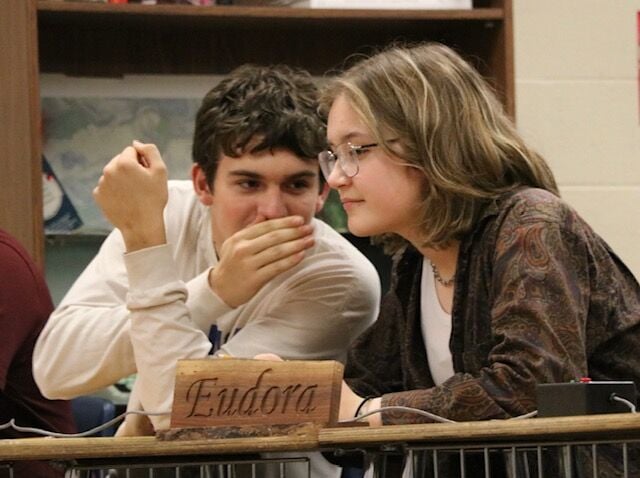 Jonas Smith discusses a question with Sophia Nichols before they buzz in an answer at the Scholars Bowl meet Wednesday night. 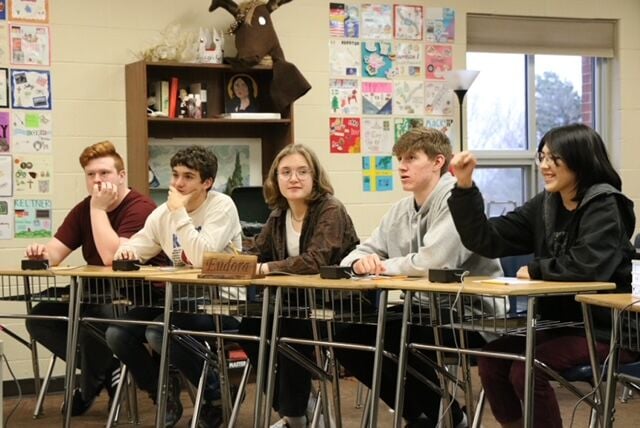 Sophia Nichols got excited about the possibility of participating in a quiz bowl like the ones she saw on TV.

After seeing a recruiting table for Scholars Bowl on her first day of high school, she hasn’t looked back since.

“I think Scholars Bowl has given me the opportunity to experience a team sport environment,” she said. “It’s very sport-like in that it involves skill, talent and strategy. It’s just academics instead of athletics.”

Each team had a panel of five team members. Eudora’s were seniors Emiri White, Jonas Staples and Nichols, and juniors Justin Shoemaker and Max Mitchell.

Nichols said the growth opportunities she’s had on the team have been amazing. She has been able to better memorize concepts, a skill that has helped in all of her classes. Knowing all the U.S. presidents in order is one of the specialties she provides the team.

“That was all I did, Scholars Bowl and cheer, that was my life,” Nichols said.

Shoemaker heard about Scholars Bowl a day before the team had a meet. After attending one practice session, Shoemaker hopped on the team and came back with a first-place win.

Shoemaker thinks the team teaches trust and teamwork, while also showcasing his love for math and trivia.

“We have a team of five. It’s not just you sitting at a table. I know my abilities, I know the other four people’s abilities and I know when to trust people,” Shoemaker said. “If we get a question about authors or poets, I know two of the other people on my team will have the ability to know that. I leave it up to them because I believe in them.”

“In most competitions, the biggest thing we hope it teaches them is humility, a little bit of grace, how to work with other people and how to be a good sport,” Garrison said. “I mean, that’s the biggest hope we have for our kids when they’re in competition.”

The students are asked 16 questions each round. Questions range from musical theater to algebra, but have foreign language, social studies, English, science, math and fine arts questions categories. The student who hits their buzzer first gets to answer the question.

Teams prepare twice a day, once before school and once after. Garrison called these short burst practices. All students are allowed to participate in the club and their team is based on age and ability. Each year the team participates in about 20 meets.

“I think it gets more students excited to go to school and get involved with extracurriculars,” Shoemaker said. “I've made a few friends from other schools in Scholars Bowl because we are kind of all in the same mindset and have the same interests.”