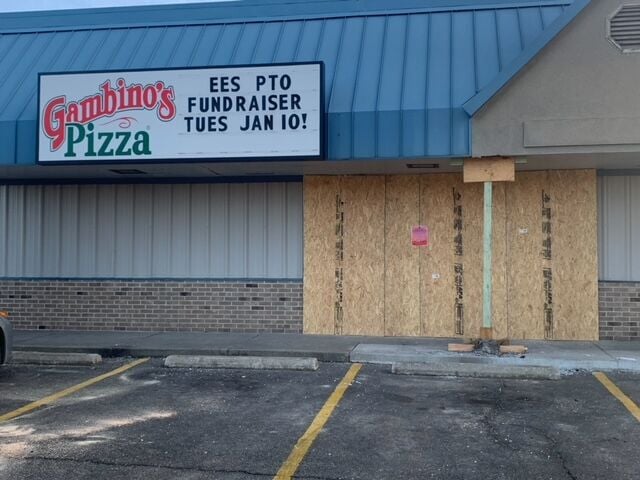 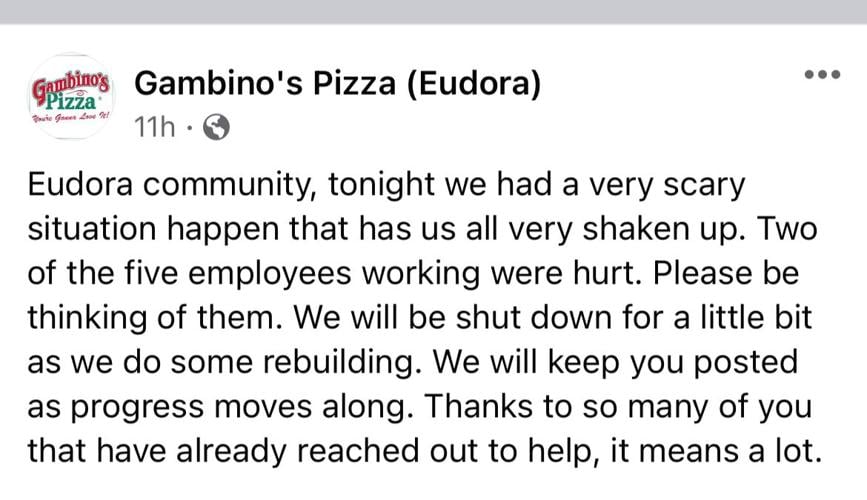 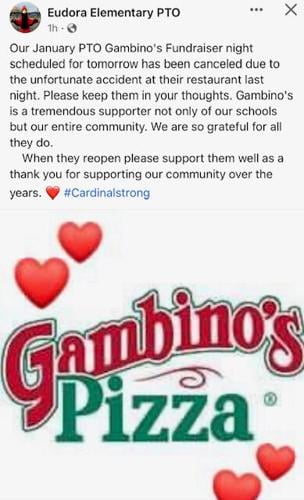 Mindy Dahl was working at Jacque's Place next door to Gambino's at the time of the accident. Dahl said she was servicing a client when the walls started shaking.

"We thought it was an earthquake," Dahl said. "But the ground wasn't moving, which was strange, so I went to look next door and saw the front was gone and the glass on the ground. So I didn't know what was going on."

Dahl said she, her client and the client's boyfriend exited the building through the backdoor and got far away from the building in case a fire broke out.

Dahl said she learned that the vehicle hit Gambino's about five minutes after the accident.

"It was shocking for sure," she said.

A Eudora man was arrested Sunday night on suspicion of reckless driving and driving under the influence after a truck crashed into Gambino's.

Eudora police reported that a red Chevrolet pickup drove into the front of the building and caused serious damage about 7 p.m.

Two employees in the restaurant received serious but non-life threatening injuries and were taken to Overland Park Regional Hospital for treatment, the police said.

In a Facebook post Sunday night, Gambino's said the staff is shaken up and to keep the injured employees in the public's thoughts.

"We will be shut down for a little bit as we do some rebuilding. We will keep you posted as progress moves along," the post said.

A sign on the door Monday morning from the city's Department of Building and Codes labeled the business as a dangerous structure.

Codes Administrator Curtis Baumann said Monday morning the building is deemed unsafe for now, but staff at Gambino's Pizza could probably be let in to start cleaning the mess soon.

Baumann said the full state of the building's structure would be determined by a structural engineer through Gambino's insurance company.

The Eudora Elementary PTO posted that its Gambino's fundraiser night scheduled for Tuesday is now canceled.

This is an ongoing story. Check back for further updates.