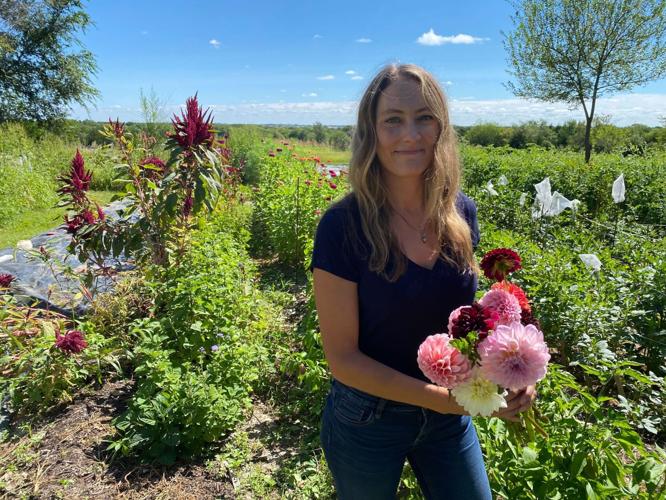 Fern’s Farmette owner Ashley Hutchison holds her favorite flower. She said Dahlias are her favorite because of the variety of colors, sizes and shades. 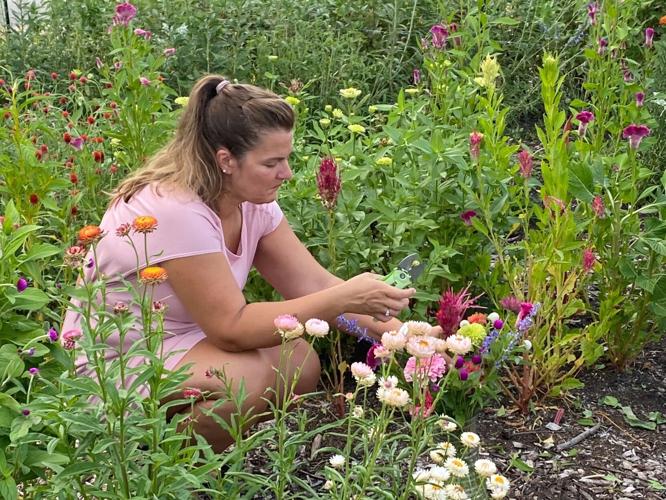 Angela Karten cuts flowers at the Giving Garden to make her own bouquet. 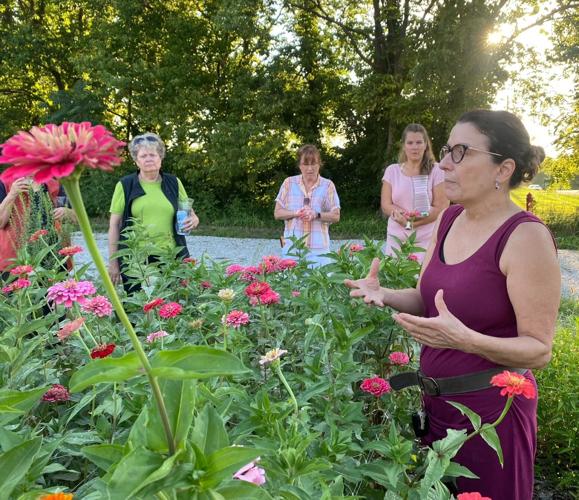 Ashley Hutchison moved to Eudora in February and had her first flowers in the ground within a few weeks.

The owner of Fern’s Farmette began growing vegetables five years ago before making the transition to flowers two years ago because of her own love for flowers.

“Really what it boils down to, they just bring me a lot of joy, and happiness, and I love all of them. So, I think that there's something about flowers that reconnect people for finding joy for the sake of joy and nothing more, nothing less, and it doesn't have to be justified,” Hutchison said.

Over 80% of flowers purchased in the U.S. are imported, yet Bloomberg reported the pandemic has been “a surprise boost for local businesses centered around floral agriculture.”

“The same eco-conscious clientele that boosted farmers markets and locavore restaurants seems eager to hop on board,” the media outlet reported.

Among Millennial women in particular, create-your-own bouquet opportunities have sprung up locally in the past year. Angela Karten recently attended the Giving Garden’s Sip & Pick event, which allows anyone to become a florist.

“So it was a nice thing to do in our community. You know, so you didn't have to drive anywhere. And just different and it was nice to meet other women who were also there,” Karten said.

Hutchison calls her position in the business a “jobby” because it is not her sole source of income but it is more than a hobby for her.

“I didn't put us out there like publicly until actually probably about a month or two ago. And the response has been overwhelming, both in terms of just general support – ‘This is beautiful. I love what you're doing. We're so excited to have you’ – and to people actually seeking us out to fulfill their flower needs,” Hutchison said.

Hutchison offers a small fall subscription for bouquets. She said she intends to have a larger subscription next year.

“And then we will be doing DIY, do it yourself, buckets of blooms, so those are really great for folks who want, you know, they just want the flowers,” Hutchison said.

Kim Glover, owner of Backyard Blossoms and Bouquets, also said her business aims to be as environmentally friendly as possible.

“I think that the whole fresh cut, local fresh cut flower business is really important. I think it's important to support that, but also that it's also giving back to this community and you know that you're also protecting the environment that way as well,” Glover said.

Glover started her research last year on flowers and began selling to her colleagues first before launching the business to Eudora in late July. For Glover, this research involved sustainable practices

“I don't use any pesticides. So I strategically planted a bird bath right between my garden so that the birds will be there and they can take care of the insects and I depend on good insects to control the bad insects. And so that's how I manage that,” Glover said.

Glover said she never pictured herself becoming a florist.

“I get to enjoy my flowers, but I also get to enjoy giving them to other people. And I really enjoy the connections I'm making with people. So I’m meeting people in Eudora because of this, and it's fun to connect with people when they're buying the flowers,” Glover said.

Glover offers subscriptions as well as selling on Facebook Marketplace.

“And so they'll order flowers for birthdays, anniversaries, or just to treat themselves and other other people. So right now it's been mainly women, I've only had two guy subscribers, but the rest, a majority of my sales, are women buying flowers for themselves or others,” Glover said.

For sisters and co-owners of Country Floral, Mary Lou Heine and Joyce McMahon, their love of flowers began when they were children, which has now grown into their post-retirement business.

Heine said she intended to garden and travel following retirement but then the two sisters decided to stay busy by opening their floral business. McMahon agreed the business keeps her and her sister busy, with the average wedding taking three days to prepare, deliver and set up.

Heine said she intends to continue with the business only until it is something that she does not enjoy anymore.

The businesses can be reached at: