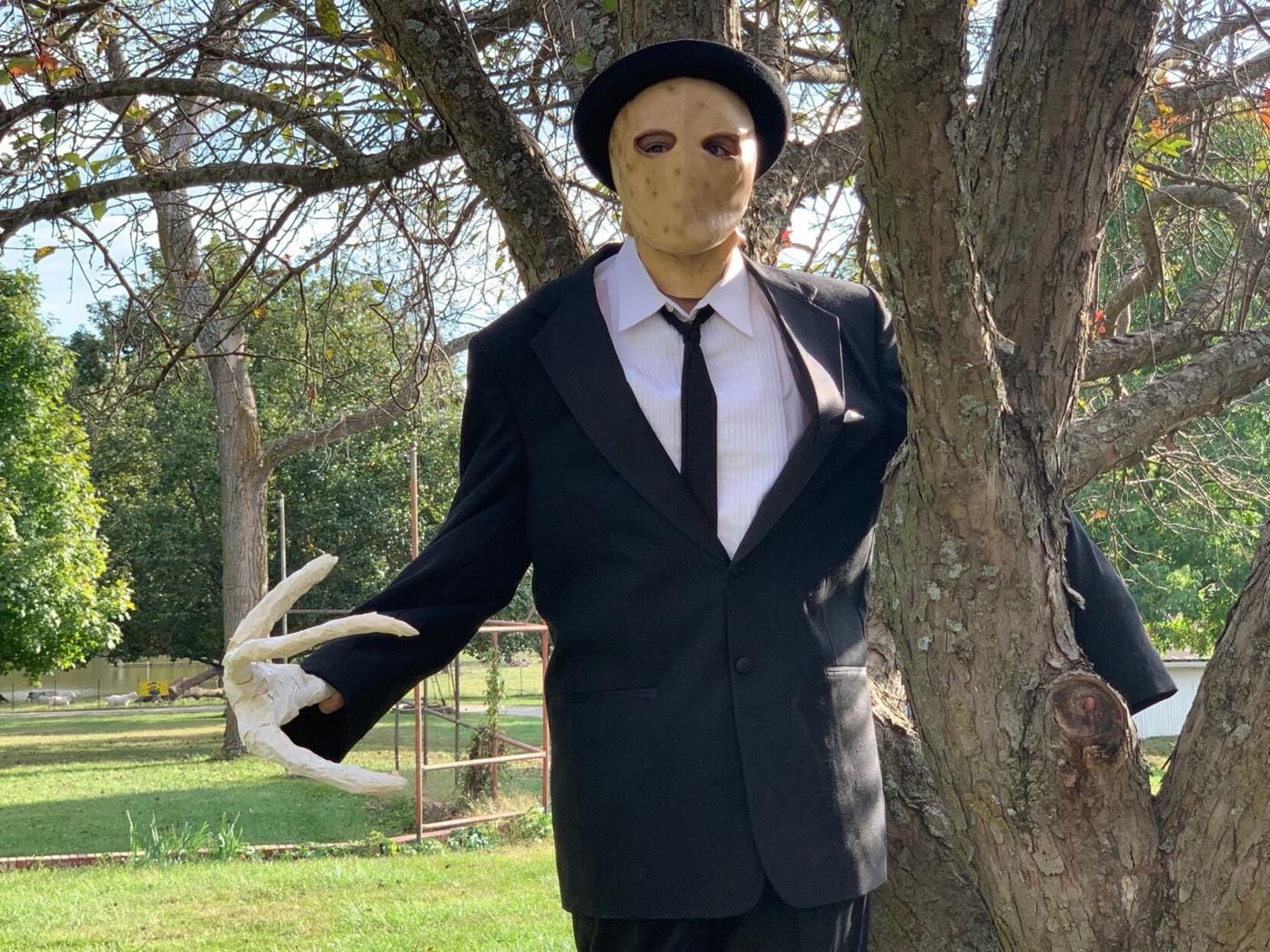 Collie Grey dons his Slenderman costume that he will wear for the haunted hayride at The Grove. The hayride will have about 14 live actors in costume, including Grey. 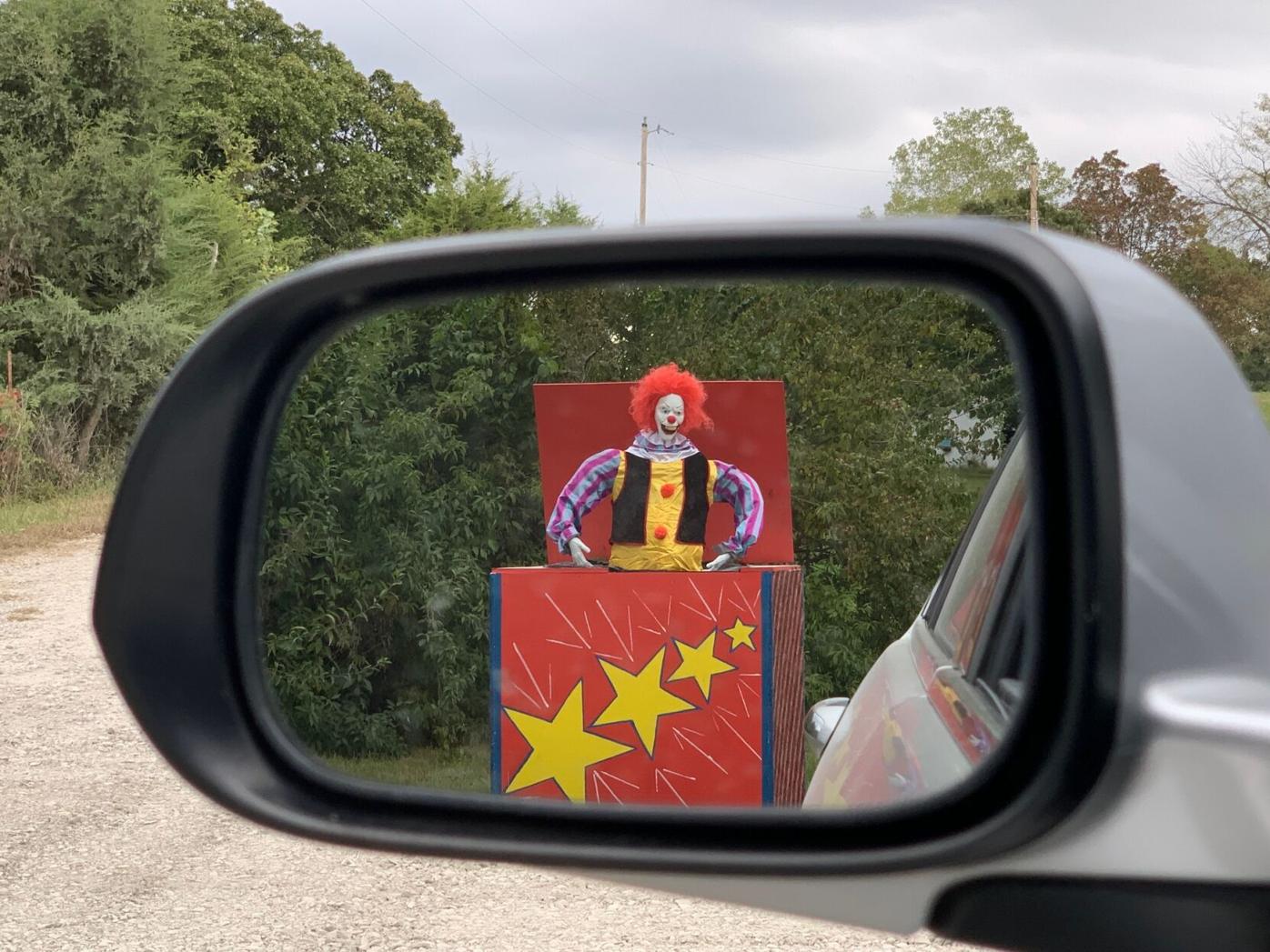 This jack-in-the-box sits at the entrance to The Grove. It was built from scratch by Nicki Reynolds.

On a quiet farm in the outskirts of Eudora, one family is preparing to give residents the fright of their lives as Halloween draws near.

After operating as a private attraction for family and friends in previous years, The Grove Haunted Hayride, 1301 E.  2000th Road, opens to the public for the first time Friday.

Nicki Reynolds is in charge of overseeing the entirely handmade costumes, props, sets, scripts and more. She has been working to complete the hayride for over a month, from the moment she wakes to the moment she goes to sleep.

Reynolds is running the hayride from her own 62-acre historical Bluejacket Crossing property, which is known for holding a large pecan grove. She hopes the hayride, named for said grove, can raise enough money for the family to purchase a shaker that makes harvesting their pecans easier.

“It’s beautiful down there, and it’s also scary at night, so I thought it would just be a fun deal to kind of get our foot in the door and let people know we sell pecans,” she said.

Halloween is one of the many holidays Reynolds takes extra steps to make special for her family.

“Halloween’s always been a big deal with my family, and I have an aunt that’s a seamstress so she sews amazing costumes,” Reynolds said. “I kept all my costumes since my kids were little and on, and I’ve always had wonderful costumes that she’s made for us so I plan on putting some of these to use.”

These costumes were used in previous years of the private hayride and now will be used in the public ride as well.

“We did it about three years ago just for my older kids – a get-together for their friends – and they loved it, and they were like, ‘You guys should do this and open it to the public,’” Reynolds said.

Both the grove and the hayride are a family production, with much of Reynolds’ family joining in on the efforts. Her daughter, Savanna Schneck, is taking part in the creative process, having painted the sign out in front of the property.

“My mom and everybody are crafty. We’ve almost had to make every single thing for sets,” Schneck said. “A lot of the stuff you buy now isn’t very good or realistic at all, so it’s helpful that we’re all very artistic and to be able to make all the props and stuff for our scenes.”

People often misconceive hayrides as something less than frightening, Schneck said. She wants people to know The Grove Haunted Hayride could be exciting for someone of any age.

“I understand that it’s a hayride, so people might feel like it’s going to be less scary because you don’t get to walk through, but it’s going to be so dark out there, and this place is kind of creepy by itself without having the props out at night,” she said. “With everybody popping out, there should be a few scares.”

One of the many actors providing jump scares for attendees will be Reynolds’ son Collie Grey. He plans on dressing up as Slenderman, which requires him to walk on stilts.

“It’s exciting and you actually get a reaction, so you know how well you’re doing, and it’s not something you get to do very often,” he said.

The hayride will take visitors through 15 sets and runs 35-40 minutes. Many of the sets will have live actors like Grey, and each will have a different theme.

Kayla St.Cyr, daughter to Reynolds, will also act in this year’s hayride, as well as organize other actors and run social media accounts.

She said this ride is a great opportunity to continue her family’s love of Halloween and costume-making.

Her mom, grandmother and aunt made sure she and her siblings went to school on Halloween wearing the best handmade costumes around. She likes the opportunity to continue Halloween traditions and make them fun for adults as well.

“It’s really important because after you grow up and you’re not a kid anymore, there’s only so many things adults can do, and this is something that you can come out as an adult or as a teenager and have fun doing,” she said.

St.Cyr also emphasized the scare level of the ride that people can expect. Reynolds advises parents to use their best judgment to determine if the hayride’s horror factor is suitable for their children.

St.Cyr said the ride does not turn back for those who become too scared on the way, so riders will experience the attraction from start to finish.

“You’ll definitely have some jump scares. I think people will be, at times, horrified with what they’re seeing in the scenes,” she said.

Those who have never experienced a haunted attraction before should come visit The Grove this year to get that opportunity, she said.

“Get together in a group of friends and just have a good time out and about, and it’s something that you can come do safely since we’re outside,” she said.

Reynolds is excited for her first ever public hayride.

Rides are from 7-11 p.m. Fridays and Saturdays through the rest of October, and tickets cost $20 per person and can be paid via cash or via debit or credit card.

Masks are not required due to the outdoor nature of the attraction. Attendees waiting for their ride to begin will be able to view horror films at an outdoor theater near the beginning of the hayride.

Those wishing to visit the haunted hayride this year can make a reservation at (785)-766-0576. Questions can be directed to The Grove’s email at thegrovehauntedhayride@gmail.com, or via their Facebook page.